How to Build an Anglo-Saxon ship

A technical advisor for timber has been Damian Goodburn BA PhD (left below) who has worked for the Museum of London Archaeology (MOLA). This video is of Damian working in the Longshed to demonstrate to the volunteers the methods used in cleaving an oak log to make planks.

At an earlier event many visitors came to see the intriguing process of driving wedges into the wood to form splits, then using axes to trim the timber down to size. This method produces wood with special strength qualities - strength that tends to be lost if the wood is simply sawn. The Anglo-Saxons understood this well, although it was a mysterious practice to most visitors. 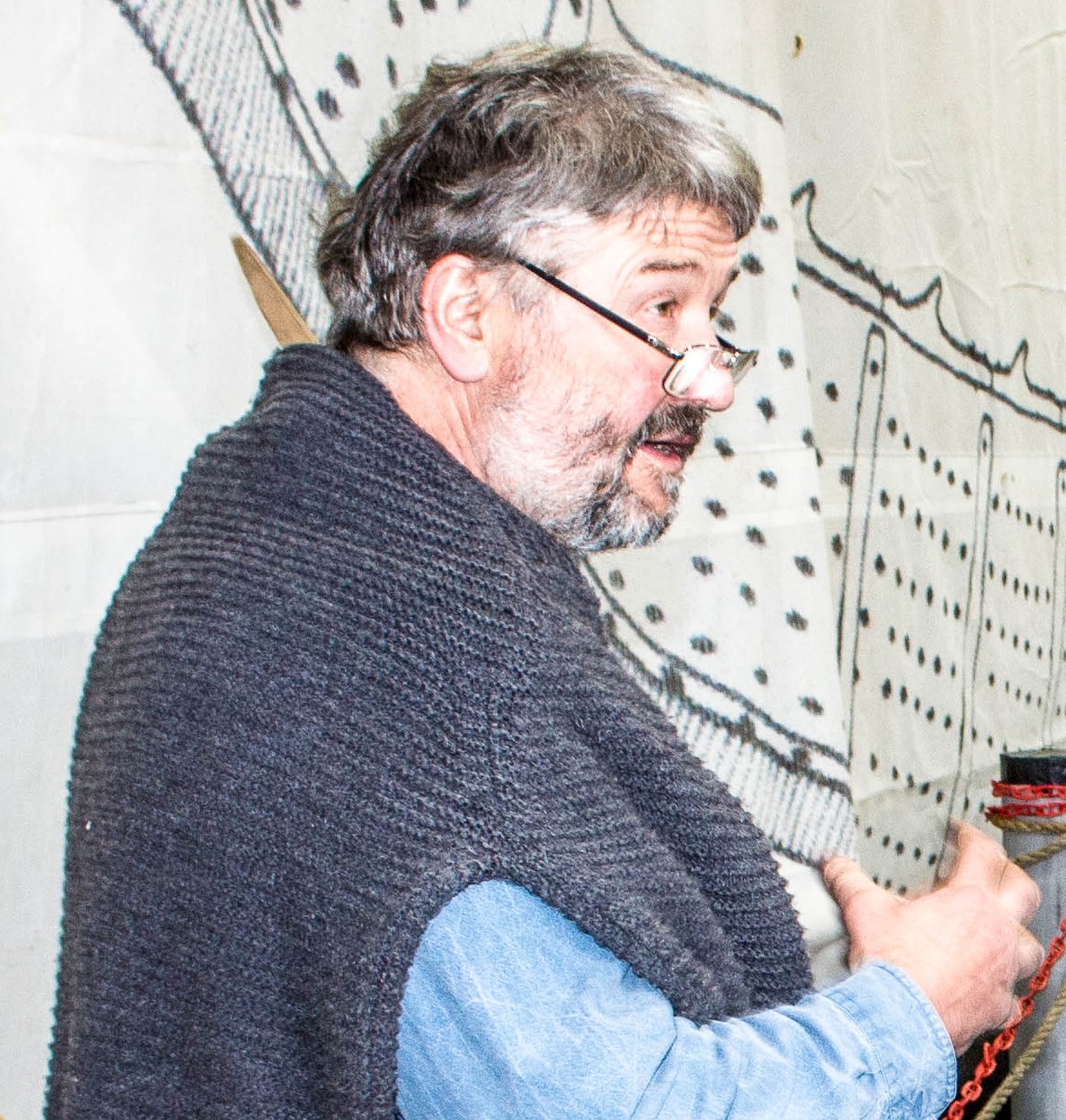 Damian Goodburn (left). A longer video of log cleaving can be seen on the Saxon Ship site or found on YouTube entitled The S. H. Ship’s Company – The perils of log cleaving. This shows another log being split in the Longshed, with a rather unsuccessful outcome. The video gives a good idea of the prolonged efforts involved, sometimes with little reward.

The Master Shipwright for the project is Tim Kirk who studied for B.A. Archaeology, Trinity St David, Lampeter.. He was trained at IBTC Lowestoft 25 years ago and lives on his own 15m craft that he built himself.

Daily construction of the ship in the absence of Tim is guided by Laurie Walker Assistant Shipwright. 'Treewright' Alec Newland (right) whose degree is from Exeter University is to be found regularly working on the ship together with Mike Pratt. Decisions relating to the build are also made in conjunction with John Cannon lead modelmaker (see Shipshape 2) and Joe Startin, lead researcher (see Investigations).

Readers of Investigations 9 will have seen the background to acquiring the timber. In a nutshell, the planking should be relatively straightforward to source as there are many places where oak trees have been cultivated for commercial use. Such trees are encouraged to grow straight. The biggest problem is finding trees with sufficient

width for the strakes. As was mentioned in Shipshape 3 the planks in this ship were made up from a number of short lengths scarfed together. The keel is long, but it is relatively small.

Supporting ribs are trickier to find as they have to have the correct curvature. If a rib has a relatively narrow span and a sharp ‘V’ shape, such as those close to the ends of the ship, they can be made from the junction of large branches. These are ‘grown ribs.’ The wider, slowly-sweeping curves of the midship ribs are very difficult to find growing naturally, so they have to be made from several pieces joined together to make ‘composite’ ribs. More of ribs later.

As with the ribs, the real challenge is to find timber for these components with exactly the correct curvature and Tim Kirk was fortunate to find a tree, pictured left and right, that could be used for them. Pictures SHSC.

The long straight keel has the large curved extensions of the stem and the stern attached to it.

After all the excavations and investigations into the ship there was little concrete evidence of exactly what the keel looked like. The reasons for this are complex, but in essence, there was insufficient time in 1939 to find a good cross-section of it. To do this meant digging through the impression, which was done by Cmdr Hutchison, but this only produce inconclusive results. The centre section of the hull was damaged during excavation due to heavy footfall. The impression was further damaged during the war. Later excavations found Hutchison’s cuts, but historic and subsequent damage made it near impossible to arrive at definitive results. Right. Actual ship's keel, centre marked with string line and plumb bob, sealed to prevent splitting (see Shipshape 1). It can be seen that it has been made thicker than the original diagram in Volume 1 (see explanation below). A picture of he keel being trimmed by Alec is on the Home page of this site. 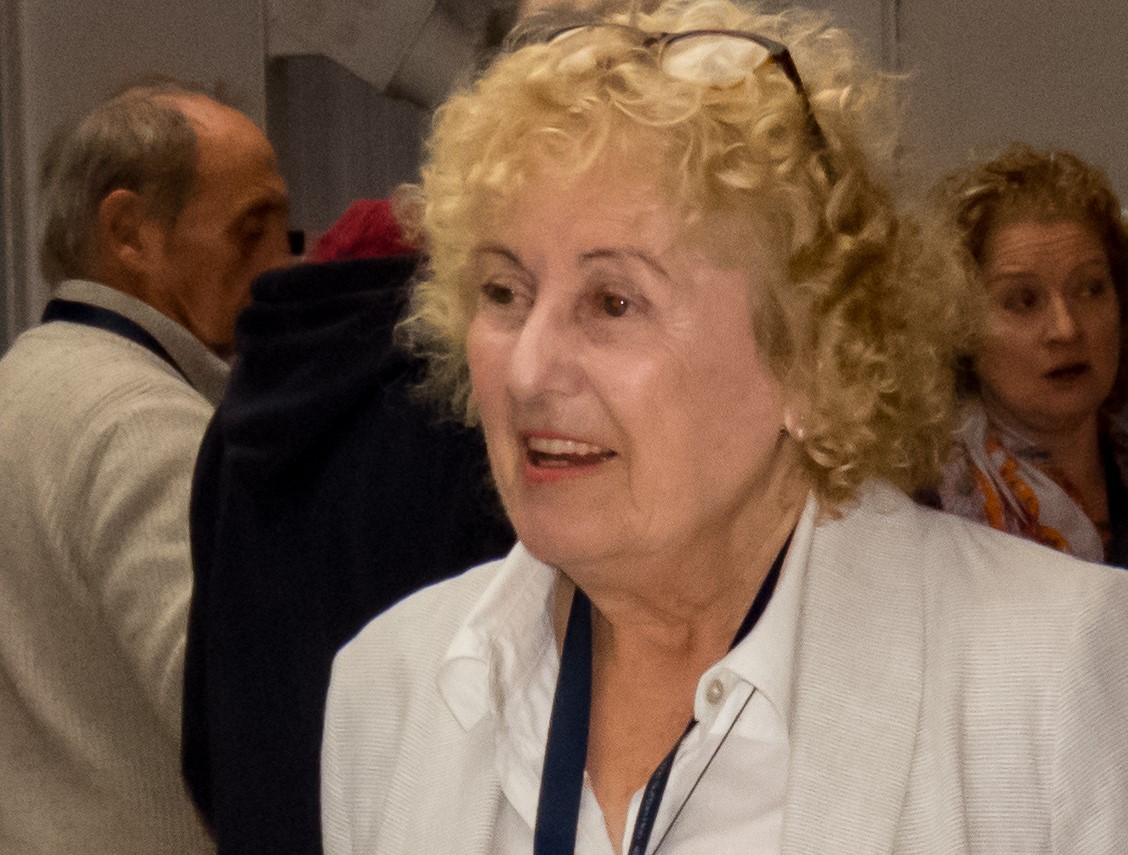 Volume 1 devotes some length to the search for keel evidence. In one area where evidence might have been good, a section of soil was lifted on a steel plate and analysed (See page 296 Volume 1). The detailed report by Valerie H. Fenwick (Pic right SHSC) who remains in close contact with the current project concluded ‘… The Sutton Hoo ship did have a keel. Evidence of the keel is extremely difficult to detect; it is not surprising that the Science Museum failed to find any. The exact dimensions of the keel cannot be stated, since it must have been considerably compressed under the weight of sand which filled the ship.’ She then goes on to suggest some possible dimensions. Angela Care-Evans devotes several pages to this keel and to the keels of other comparable ships commencing page 375 in Volume 1, but she also says ‘it became clear that unless all the surviving details of the keel plank’s structure were recovered isolated features could not be realistically interpreted. Yet despite the recovery of as much evidence as was possible, our knowledge of the structure of the keel plank is still not wholly complete and never can be. … so potential cross-sections of the keel can be suggested.’

The 3 cross sections in Volume 1 seen here and their approximate form have found general acceptance with most observers to date, but of course, to actually build the ship they have to be reviewed and analysed more than ever before. Not having dimensions is a problem, but also, not having dimensions can be an advantage. Mrs Fenwick’s observation that the 'keel must have been considerably compressed' is very important. The 1in thick planking was compressed to the thinness of a piece of paper, so the keel must have sustained similar reduction in dimensions. How much reduction could now be decided - taking into consideration all other factors. Such decisions are of vital importance, for they will have a knock-on effect to many other aspects of the build. 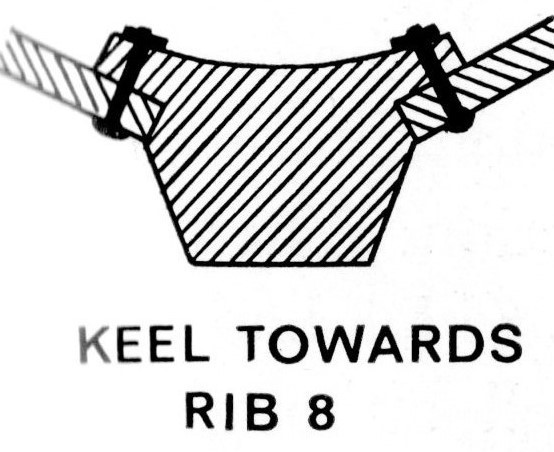 Transitional forms. These 3 cross-sections from Volume 1 pose real construction problems which might be reduced to a simple explanation. The keel cross-section in the middle of the ship (above left) is ‘wide and flat’ ACROSS it. The bow section is deep from ‘front to back’ ALONG it (left i.e. from top to bottom), so somehow the shape has to alter as it moves towards the bow. Effectively, it has to twist through 180 degrees. Where does this shaping begin? How does it progress? At some point it will be the shape of the cross section on the right. How can this progressive change be carved into the wood? The 3 sections are all part of the same assembled structure. How will it affect the bonding of the other planks which start by just lying alongside the keel (above left), but finish with their ends running into it (left) at varied angles as it gradually becomes the stem? This is all very complicated as there are major joints along the way. There are pictures of the start of this process lower on this page.

To read more about timber and what was needed to make a keel read Ship > Investigation 9 More about Trees on this website. The requirements for the keel are there. The keel must be supported (see Shipshape 2) and lifted off the ground to provide access, but this can be done with modern materials. It is curved upwards towards the ends to provide ‘Rocker’ (see Investigation 6), so the supports (see right) vary in height. Where modern materials are being used it is a good idea to paint them black so that visitors can distinguish the ship's timbers, from what is temporary structure that will be removed later. It IS possible to use ‘Anglo-Saxon style’ materials throughout as has been shown, but today we have Health & Safety concerns that they didn’t have, so the builders must be mindful of these.

Behind the black keel supports in the picture, Alec is using a ‘T’ axe (see Home page and video above) which can produce surfaces to within a couple of millimetres, to trim the keel to shape.

There is an additional problem here. The stem could be made from ONE piece, or from TWO pieces, before it joins the keel. With two pieces, the linking piece is called the ‘underlout’. There is no evidence of either construction method being used in the original ship. After much discussion, especially with the historical technical adviser, Damian Goodburn it was decided to use the underlout method which includes a second joint. Tim Kirk's discover of a suitable tree (above) made this decision easier.

In the workshop some timbers can be seen in their rough state. Left is a stern section. Below, after trimming and shaping the stem is being marked out. 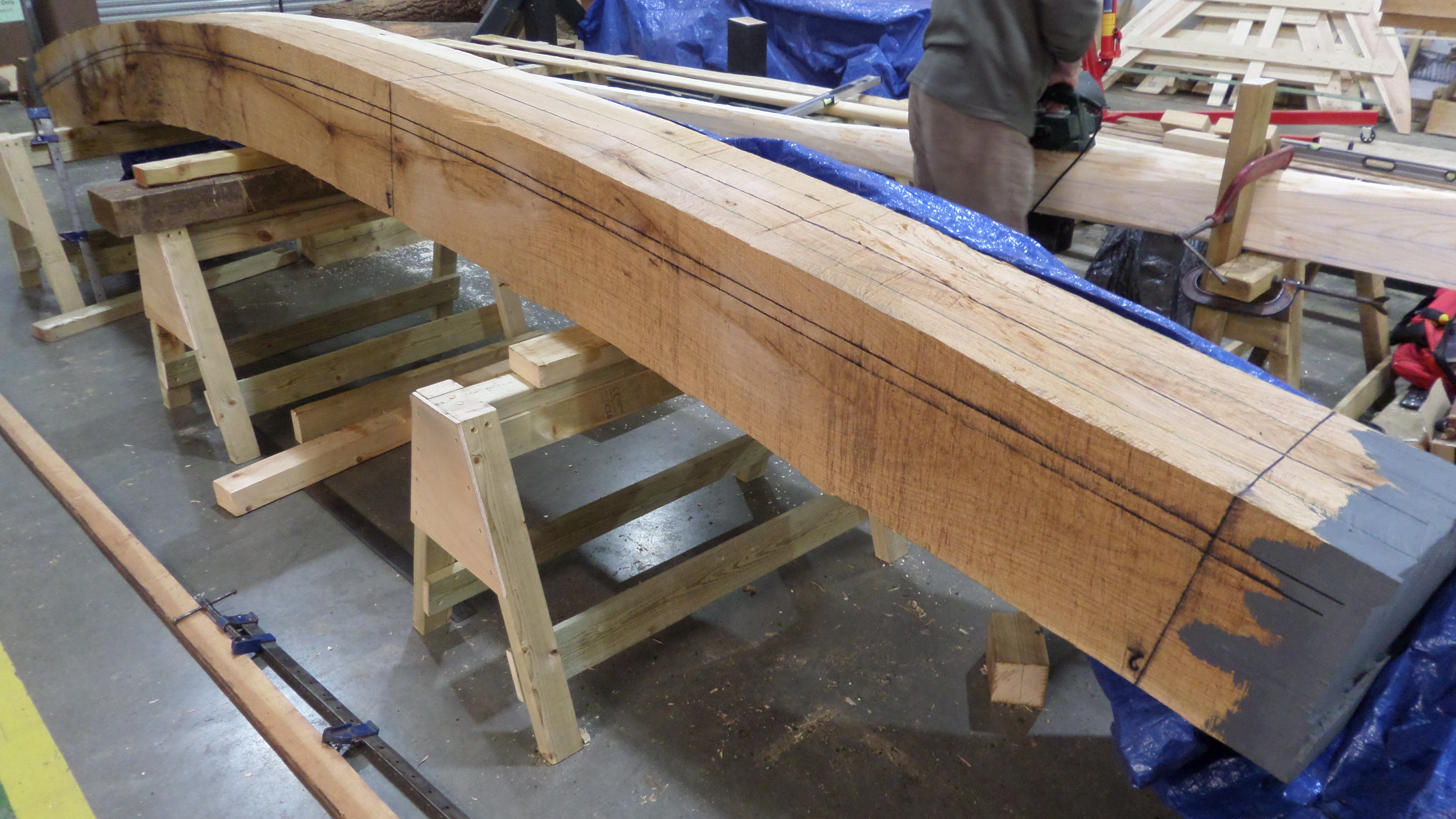 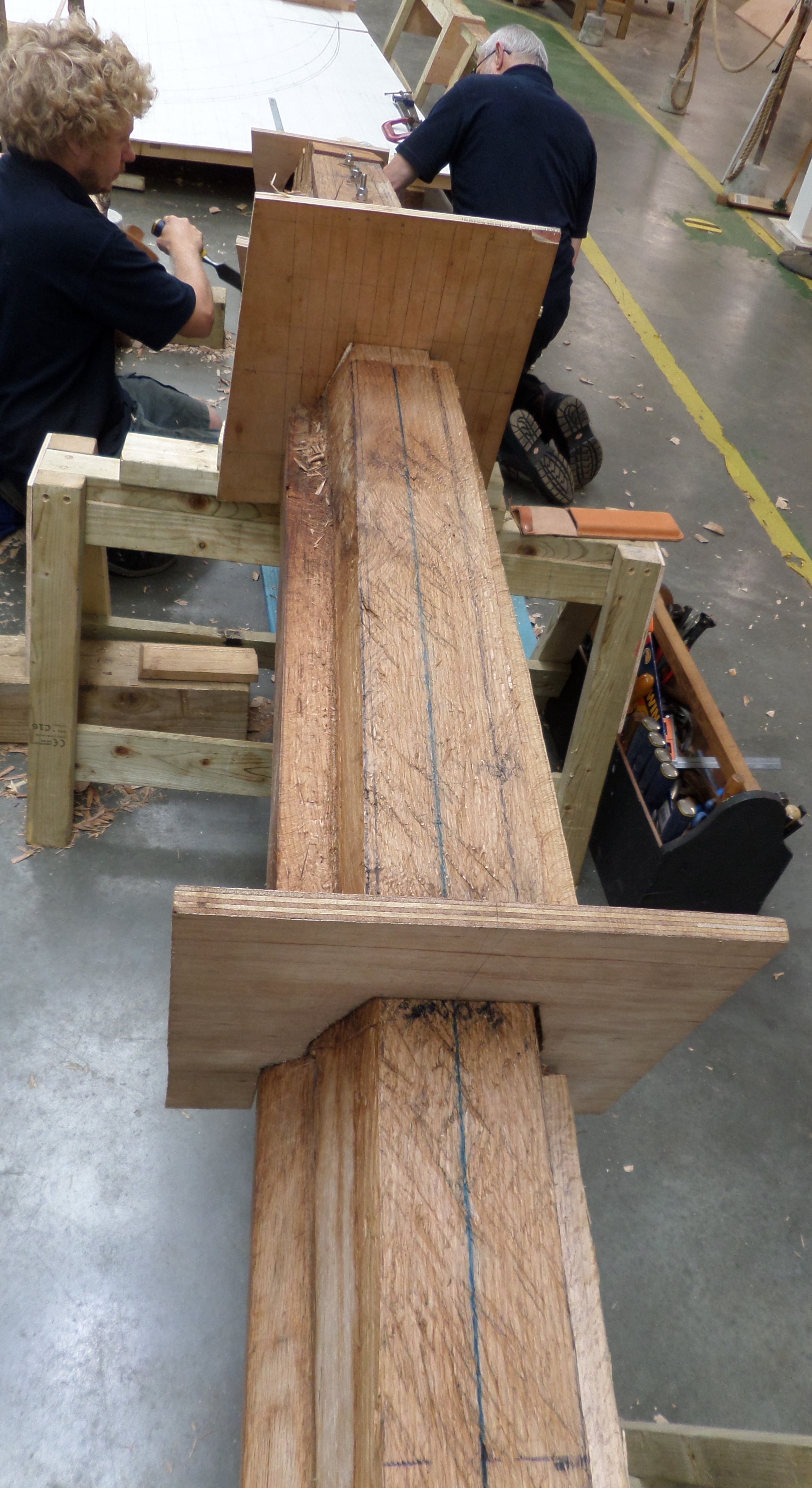 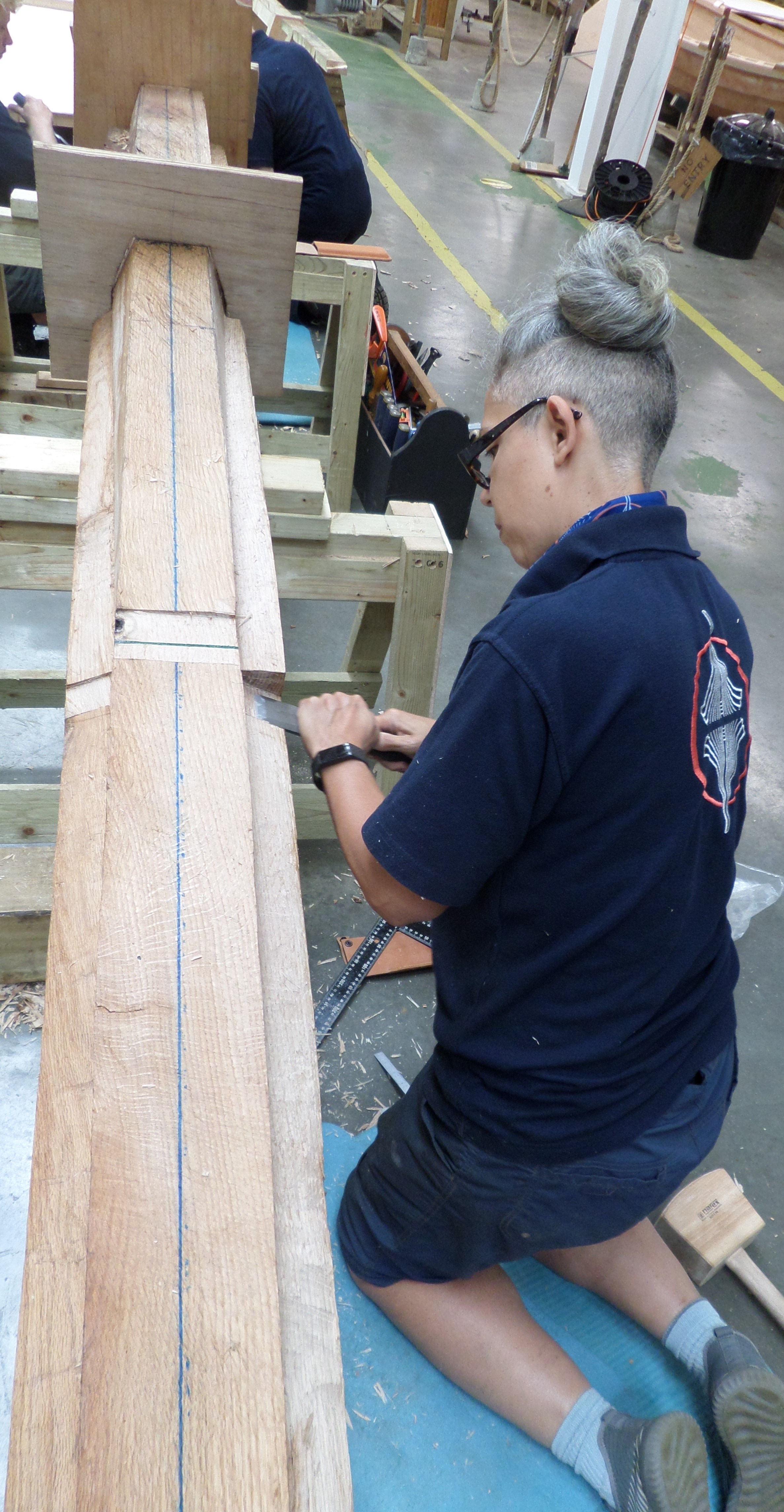 Here comes the challenging operation concerning the transition of the shape of the keel into the stem, which as it goes forward becomes the Cutwater. We are not Anglo-Saxons. They could do this by eye as they went along, but we first calculate the changes at regularly-spaced points to replicate their work, then make patterns of their shapes at those points. Following this, the gradual change of form from one checkpoint to another can be worked. Tim Kirk described it in this way: ' The issue is not so much that we cannot work this 'by eye' and thus have to calculate changes - we can, and would on a new-build - but rather that we are trying to accurately replicate what went into the ground and so need to make patterns at local intervals to ensure that we do this correctly. Once we know that this is correct locally at the design stations, then we can cut the rolling bevel in the area between by eye.'

Left. The stem has preliminary shape and two intermediate patterns are in place. Right. The precise shape is being refined, then checked by applying the pattern at that location.

It will be published about late October.

The actual progress in the Longshed is well ahead of this account.