The ship has a number of component parts and materials used in its construction.

The names can be unusual, so here are some short explanations to make clear what is being referred to.

Most people are familiar with the keel which runs like a spine along the bottom of the craft. This ship has a rather unusual keel by modern standards, because it is so small, in fact it looks dangerously small and likely to break. Scandinavian ships developed from dug-out hulls. Hollowed out tree trunks had their sides pushed outwards whilst being soaked with water. They then had additional planks sewn onto the top edges of the dug-out. This is the construction of the Hjortspring ship, see diagram in Investigation 3c. Paddle or oar driven craft such as Nydam (Inv. 3b) craft don’t necessarily need large keels which would only increase their draft and restrict their range in shallow water. When ships started to sail (Roskilde Inv. 3a) they needed a deep keel to grip the water and also to take the heavy downwards loading of the mast. The Sutton Hoo ship could not take that load. 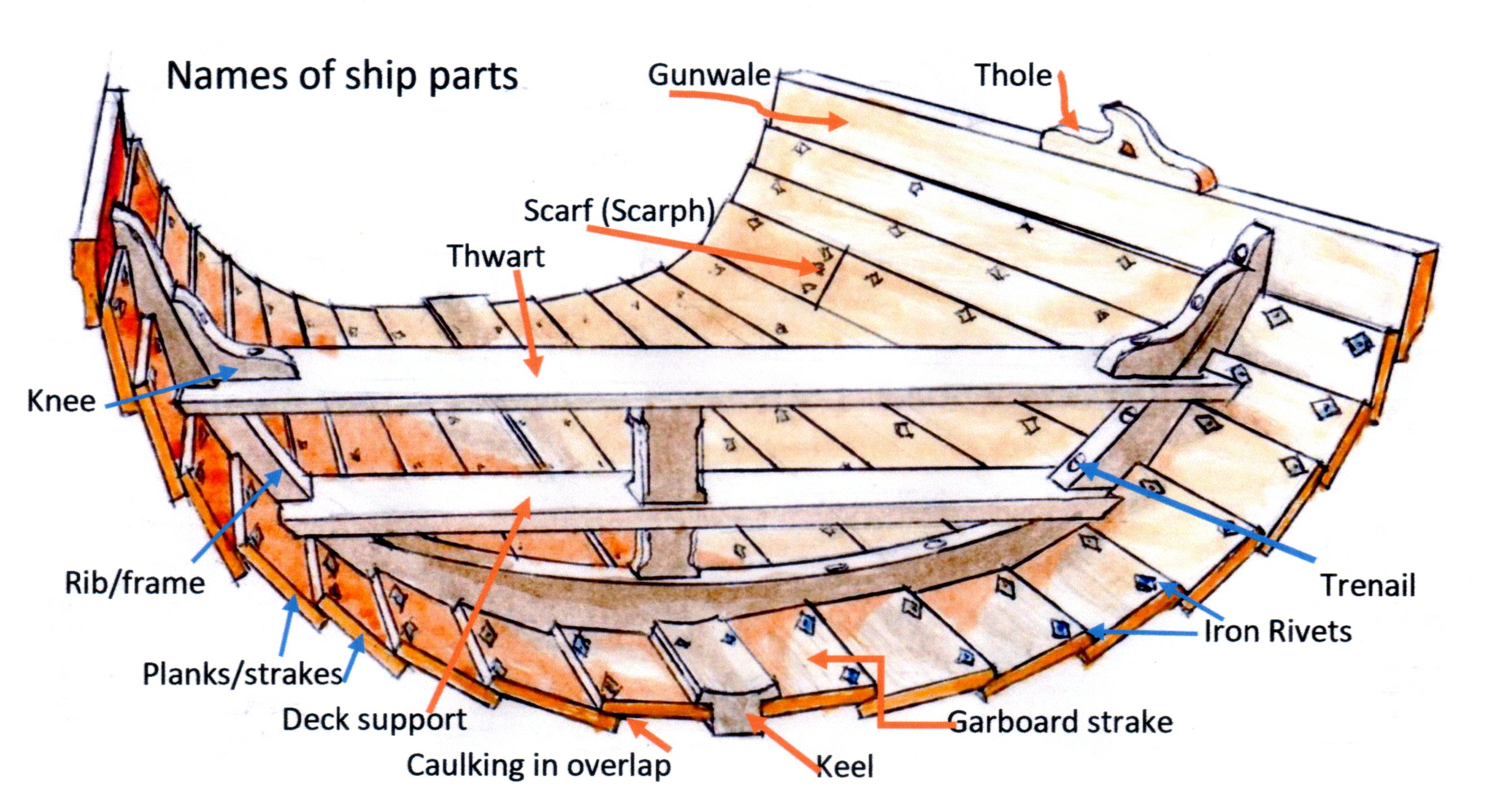 It is known that the compression of the planking on the Sutton Hoo buried ship reduced the thickness of the wood to hardly the thickness of a piece of paper, so the same principle would apply to the timber of the keel. One of the judgements that has to be made is the amount to be allowed for this keel-thickness compression, which the reconstructed ship will use. The keel,

being a long straight timber is relatively straightforward to source today (Inv. 9). It will curve downwards in the middle naturally to take the ‘rockered’ shape that is required (Inv. 7&9).

The ends of the ship curve upwards and these parts have to be made from additional curved timbers called cutwaters. The one at the front is known as the Stem and the one at the rear is called the Stern. As the front of the ship is almost the same pointed shape as the back, its form is described as being double-ended. If the stem/sterns cannot be sourced in single pieces of wood they will have to be made up with separate sections called Futtocks.

Planks are also called strakes. These are added on either side of the keel (Inv 8). The first pair are known as Garboard strakes. The edges of planks overlap each other and are fastened together with rivets. The construction is called Clinker built. Although the strakes appear to be straight, they have to be shaped into long curves like bananas in order to produce the ship’s shape. They are narrower at the ends than in the middle. To try to make the joints between them watertight they have a soft material known as Caulking trapped between the planks. A variety of materials can be used for this, wool, cloth, string, soaked in wax, tar or animal fat. It is not known exactly what was used on the Sutton Hoo ship. It was described as ‘organic’. Pieces of bitumen were found in the ship, but their use is not known for certain. The individual planks do not run the full length of the ship. Their ends are joined to each other using Scarf joints (Inv 8).

Ribs may also be called frames. These are curving members that run across the ship and they are put in to support the planks. On this ship they are roughly 3ft apart and there are 26 of them. They are the most difficult parts to find timber for, because of their curved shapes which vary along the length of the ship. Near the ends they are tight ‘U’ or ‘V’ shapes that can be found on naturally grown trees, called ‘grown ribs’, but in the middle of the ship they are wider, sweeping curves. They will need to be made up from several shaped parts joined together called ‘composite ribs’.

The easiest way to put in frames is just to make them touch each plank on the overlap as they pass over it. It is much harder to shape them to press down right across the width of each plank. This involves cutting zig-zag shapes on the outer edge of the ribs. The shaping can be seen on this diagram, left, which also shows rivets,trenails and a composite rib. This was how the ribs were shaped on the Sutton Hoo ship. It is believed that the planks were attached to the ribs at keel and gunwale with spikes (long nails). Intervening planks were probably attached using trenails, which are shaped dowels. As they were wooden (willow), they do not show in the archaeology. They would pass through the middle of the width of the plank to allow for expansion and contraction of the timber on either side of them.

True Scandinavian ships of this era did not have rib/plank attachments of this type, but mainly used lashing systems. The Romans used the Mediterranean system of constructing a rib/keel skeleton first and then applying the planks, edge to edge, 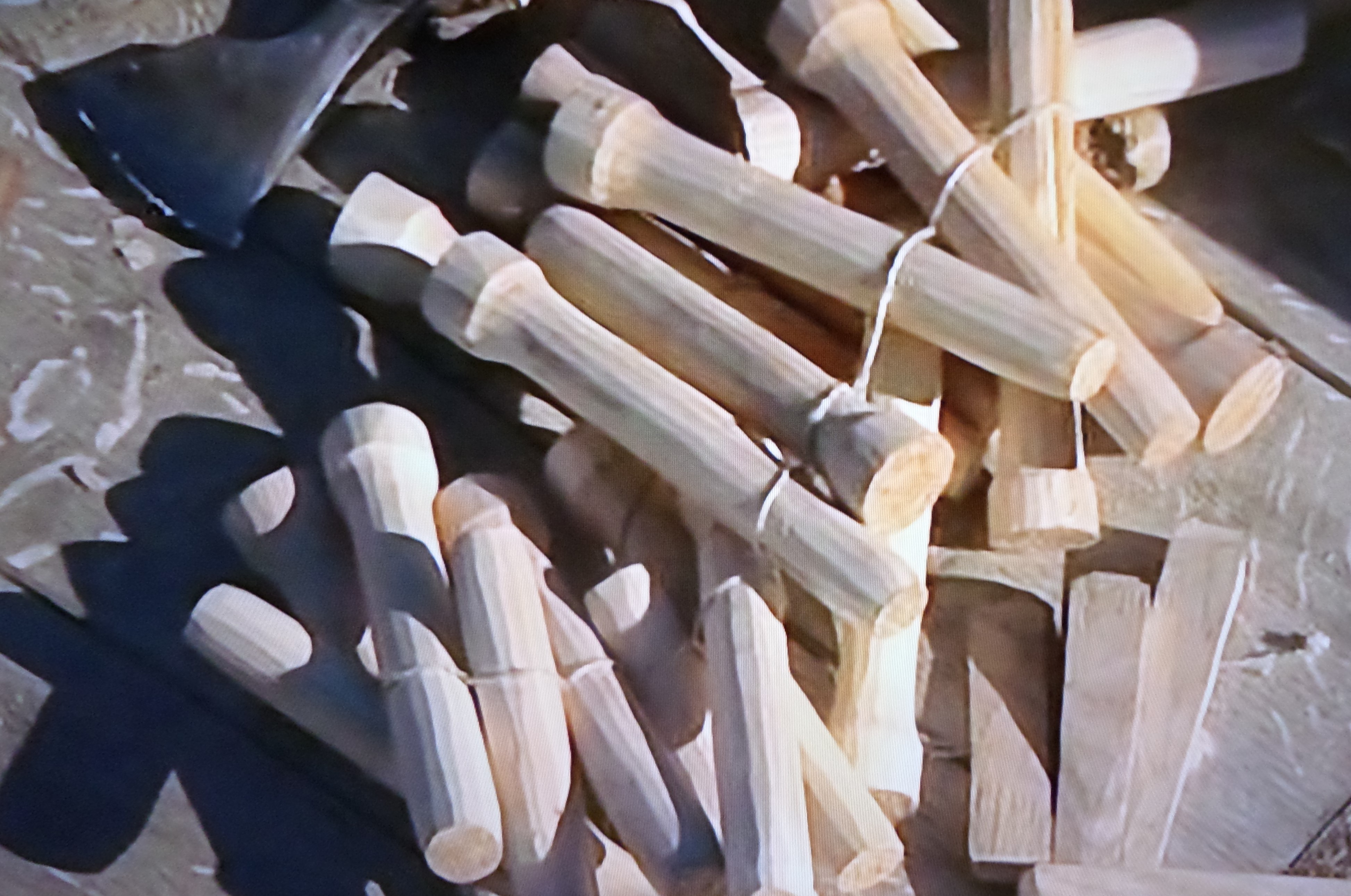 afterwards (Carvel construction). England/Britain had been under Roman rule for 400 years and some of their construction techniques, inevitably, would have been absorbed by the local people. The rib-fixing system used on the ship might be described as a ‘blend’ of Mediterranean/Scandinavian systems. This is probably as strong an indication that we will have, that the ship was constructed in this country rather than in Scandinavia which fell outside the Roman Empire.

being the seats, but really, they are important

structural members. Their evolution can be seen on the Hjortspring ship (Inv. 3c) where only their outer edges were flattened to form seating for paddlers. When rowing demanded broader seating further inboard, they became wider. The Sutton ship is quite deep and in order to row it, it is necessary to be able to brace legs and feet on a deck at a lower level. In Investigation 3b there is a photograph of Malcolm Hodd (Woodbridge Riverside Trust) standing inside the Nydam reconstructed ship where the decking has been removed. The total depth of this more ‘V’ shaped craft can be seen and the storage space beneath the deck is mentioned. Additional support brackets called knees are used to increase the strength of the attachments between components.

The top plank, outer edges, of the ship are called gunwales which is a corruption of ‘gun-walls’, often pronounced ‘gunnel’, from later craft. This has to be a stronger plank than those below it, especially if it has to take the stress of the oars being pressed against it to drive the ship. The shaped wooden support above the gunwale for the oar to pivot against, is called the Thole. Many traditionally-built craft in third-world countries still use thole pins (large dowels) even today, as they are simple to construct and easy to replace without specialist equipment or tools. Evidence of 28 tholes were found in the ship impression, but if all the thwarts were used for rowers then the ship could have had 40 tholes. On the earlier Nydam ship the tholes were lashed in place, but this proved to be insufficiently rigid on the modern reconstruction, where the tholes were later spiked to the gunwale. To hold the oar in place against the thole is has to have a lashing, called a gasket. This is a loop of rope or leather. In use, oars are usually pulled against the thole, but if the oar needs to be ‘backed’, that is pushed, to help manoeuvre the ship, then the thole no longer works unless the oar is secured to it with the gasket. A hole for the gasket is essential to all tholes, but it is not known how this was arranged on the Sutton Hoo ship. Today, rowing craft use metal oarlocks, or rowlocks to allow the oar to be both pushed and pulled.

Oars can be made from a lightweight softwood such as Spruce, or can be made from Ash which is much heavier, but tough and durable. When ships began to sail and heel over to the press of the sail, the hulls had to be deeper outboard which placed the tholes uncomfortably high, so instead, holes were cut through the next plank down to allow the oars to be run out from inside the craft. To seal the holes when sailing there are rotating flaps outside the hull. The Sutton Hoo ship does not have these.

It can be seen from the arrangement of the ribs at the stern of the ship that it had a steering rudder, but non was found. The complex story of the rudder will be the subject of another Investigation later.