Many people ask the following:

How accurate is The Dig? 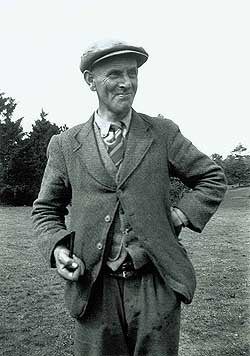 My comments are in blue (PC).

The best explanations that I have seen are in an article How accurate is The Dig? (as above) by Rebecca Wragg Sykes published Friday January 29 2021, 5.00pm, The Times. The text is below, but the illustrations are omitted, though their descriptions are included. To see them, access the original. I also include an extract from Private Eye 1541 Feb-March 2021.

Basil Brown, left, and Ralph Fiennes, who plays him in The Dig

Rebecca Wragg Sykes is an honorary fellow in the School of Archaeology,

Classics and Egyptology at the University of Liverpool.

The Sutton Hoo excavation, which forms the central focus of the new Netflix film The Dig, produced one of this country’s most important archaeological finds. Dubbed “Britain’s Tutankhamun”, the uncovering of a 1,300-year-old ship entombed beneath a huge mound in Suffolk was breathtaking. As sensational golden treasures emerged, spectral visions of vanished royal lives — probably the Anglo-Saxon king Raedwald — were irresistible. The film is based on a novel by John Preston in which more attention is paid to excavating the characters of those doing the digging, than to the archaeology. But how much does The Dig — directed by Simon Stone — reflect the reality of Sutton Hoo?

Could you see the ship as clearly as it appeared on screen?

The first hint that a buried ship might lie within Mound 1 at Sutton Hoo was an iron rivet found three days into the dig. Then the outline of a massive clinker-built hull with overlapping planks attached with hundreds of rivets slowly emerged. For the film, the production designer Maria Djurkovic (once married to the novel’s author) reconstructed entire mounds in a field in Surrey, even sprinkling them with wildflowers. Yet it’s impossible to recreate the unique conditions of 1,300 years of burial, and the soil acidity at Sutton Hoo destroyed virtually all organic remains. The ship’s form was visible only through compressed sediment and staining. The movie’s use of plaster and wood to fabricate the ship therefore gives a more substantial, neater effect than the crumbly, ghost-like impression facing the excavators.

ERIC GREENWOOD FOR THE TIMES

Were the tools portrayed on screen accurate?

Today’s archaeologists are generally very picky about their tools, and in Britain 4½in pointing trowels are favoured, but over the Pond many swear by larger, more flexible gear. Excavation tools seen in The Dig include mattocks, coal shovels, wooden-handled spades and brushes, as well as trowels. The earliest recorded archaeological use of a trowel was in 1808 and they were certainly used on contemporary excavations in the 1930s, while the other tools are evidenced by contemporary photographs of Sutton Hoo. These reveal that dental picks were preferred for extra-fine work, while fireside bellows were used to blow away loose sediment.

A replica of the Anglo-Saxon helmet found at Sutton Hoo

Were there women archaeologists, as depicted in the film?

Peggy Piggott (Lily James in the film) is the only woman shown digging at Sutton Hoo, although Edith Pretty (Carey Mulligan) mentions an interest in archaeology. In fact, female archaeologists go back to before the 20th century and, as the Trowelblazers project (trowelblazers.com) shows, early women pioneers often collaborated with each other and mentored the next generation. Nina Layard, for example, was born in the 1850s and dug many sites including an Anglo-Saxon cemetery in Ipswich from 1906-07.

Peggy began her archaeological journey under the tutelage of Tessa and Mortimer Wheeler, the founders of the Institute of Archaeology in London, where they trained many other young women. The Dig is set in 1939 and this decade was something of a golden age for professional women archaeologists. Most striking is the prehistorian Dorothy Garrod, who discovered two Neanderthals; one, from Mount Carmel, Palestine, was found by a local woman, Yusra (her surname is unknown), and Garrod’s student Jacquetta Hawkes (the first season of that site had an all-woman crew).

As a teaching fellow and director of studies at Newnham, Cambridge, Garrod probably tutored Peggy there and in May 1939, when Garrod was appointed the first female professor at Oxbridge, everyone digging at Sutton Hoo must have been aware.

Was the representation of Peggy Piggott accurate?
Peggy Piggott, née Cecily Margaret Preston, was the aunt of The Dig’s author, John Preston. Her character appears as something of a sidekick to her older husband, Stuart; early on, Charles Phillips of Cambridge University is heard to declare “We need Piggott!” When the Piggotts arrive on site, apparently newly married, only a nod is given to Peggy’s expertise. On the whole she is presented as deferential, even bumbling, putting her foot through a hollow feature.

In actuality, Peggy was only a couple of years younger than Stuart and was an extremely experienced excavator by 1939. She was awarded a diploma at Cambridge (women being excluded from degrees) and further studied in London where she met Stuart. Over 60 years her career included digging for the Ministry of Works during the war, excavating six hillforts and numerous other sites, and becoming an ancient bead expert and curator at Devizes Museum. She was still doing fieldwork in her seventies, collaborating with Isobel Smith and Eve Machin. Had she wished to pursue academia — and been male — she would surely have achieved a professorship.

Carey Mulligan as Edith Pretty, the landowner of the Sutton Hoo site, alongside Fiennes

It’s made clear in the film that the Piggotts’ marriage is already in trouble, with Peggy and Stuart looking elsewhere for affection. In reality they had been married for a couple of years before the Sutton Hoo dig and eventually divorced in the mid-1950s, with Peggy citing non-consummation. She went on to enjoy a happy, but sadly brief second marriage, then a companionship with Arnold Lawrence (TE Lawrence’s brother). After his death, she found a deepened friendship once more with Stuart Piggott.

Did the gold really look so shiny when it was found?

In the movie Peggy is the first to find a gold artefact, one of the gold and red enamel sword “pyramid” decorations. It’s noticeably shiny as it comes out of the ground, and other beautiful pieces are shown, including the stunning gold and enamel lid of an otherwise rotted-away coin pouch. While many of the other metal finds from Sutton Hoo were corroded, including the iron ship rivets and the sword, gold generally does not react in the same way to being buried in the ground and often looks astonishingly fresh. Basil Brown wrote in his journal that “all the objects shone in the sunshine as on the day they were buried”. The finds raised security issues, and Stuart Piggott reminisced how they had been forced to take it to the pub in their pockets, fielding innocent questions from locals as to whether they’d “found any gold yet?”

Is the photographic archive of the dig real?

The recording of the excavation is a key theme of The Dig, connecting to threads around mortality and remembrance. The photographer Rory Lomax, described as Edith Pretty’s cousin, is an invention, but an incredible visual archive from Sutton Hoo does exist. One series of photographs was taken by the archaeologist OGS Crawford, and another by Mercie Lack and Barbara Wagstaff, two friends who happened to be visiting the area on holiday; the latter collection includes very early colour images. In the film Lomax shoots many striking portraits of Peggy, but in reality, there are hardly any photos of her face; one rare exception shows her “cooking on a picnic fire” and perhaps inspired a campfire scene where she bonds with Lomax.

Was Basil Brown ignored by history?

While Brown (Ralph Fiennes) was respected locally as a freelance excavator for Ipswich Museum, scenes in the film show him side lined when the other archaeologists descend and treated disparagingly by Phillips (Ken Stott). In reality, Brown did remain on the dig, but wasn’t permitted to work inside the burial chamber area. It is undeniable that social class at the time played a strong role in the ability of individuals to become archaeologists. Archive photographs show while Brown had comfortable trousers to excavate in, he also sported a fitted waistcoat, tie and pocket watch. In one image he is shown standing next to Phillips who wears braces over a shirt and bow tie. In contrast to the workmanlike men, the attire of on-screen Peggy, who has supposedly just come from honeymoon, is somewhat out of place until she borrows some things from Edith Pretty. In reality, photographs often show her, rather than wearing floral dresses and shorts, excavating in a T-shirt and dungarees or a boiler suit and natty white plimsolls.

Was the story Peggy tells about the nightingale and the cellist true?

Wonderfully, this is true. The BBC’s first live radio broadcast in 1924 was a singing nightingale accompanied by a cellist to which more than a million people listened. Further duets were sent out over the wireless and in 1942 there was an unexpected accompaniment when a secret aerial raid on Germany was accidentally captured. Nearly 200 bombers began flying over the garden in question, and while a canny engineer who realised the broadcast might give the Nazis advance warning pulled the plug on the broadcast, the eerie sound of massed approaching engines was still recorded.

Rebecca Wragg Sykes is an honorary fellow in the School of Archaeology, Classics and Egyptology at the University of Liverpool.

The Dig is on Netflix

Additional Comment PC.   When local people who are associated with the Longshed/Sutton Hoo are asked about the accuracy of ‘The Dig’  there is general approval of the historical accuracy of the discovery/excavation, apart from the ‘romantic’ content which as a ‘fictional novel’ or as ‘entertainment’, it was probably wise to include. The introduction of Rory Lomax for romantic reasons was the biggest problem, because the incredibly important, documentary photography by Mercie Lack and Barbara Wagstaff that is still relied upon today went unrecognised as theirs, as a result. Cary Mulligan did a good job, but being 20 years the junior of Mrs Pretty, was portray as possibly too young. Mrs Pretty's health was not good and she died within 3 years of the film's events. Ralph Fiennes’ performance is applauded and greatly appreciated, for Basil Brown (see introductory picture) is seen as an outstanding local hero whose careful, methodical approach provided the foundations for the success of the excavation. Most written accounts mention, but do not impress upon people the effects of the imminent world conflict. The film does recognise this and includes it in the narrative, which is almost a new understanding for most people.

To see the actual chronology of events go to Ship and find Ship Discovery.

We are constantly asked - Is the ship still there?

The short answer is No.

The long answer is: Read the rest of this website!

For the people responsible for the burial the most valuable thing that they placed in the ground was not the treasure, but the ship.