1. How to build an Anglo-Saxon ship 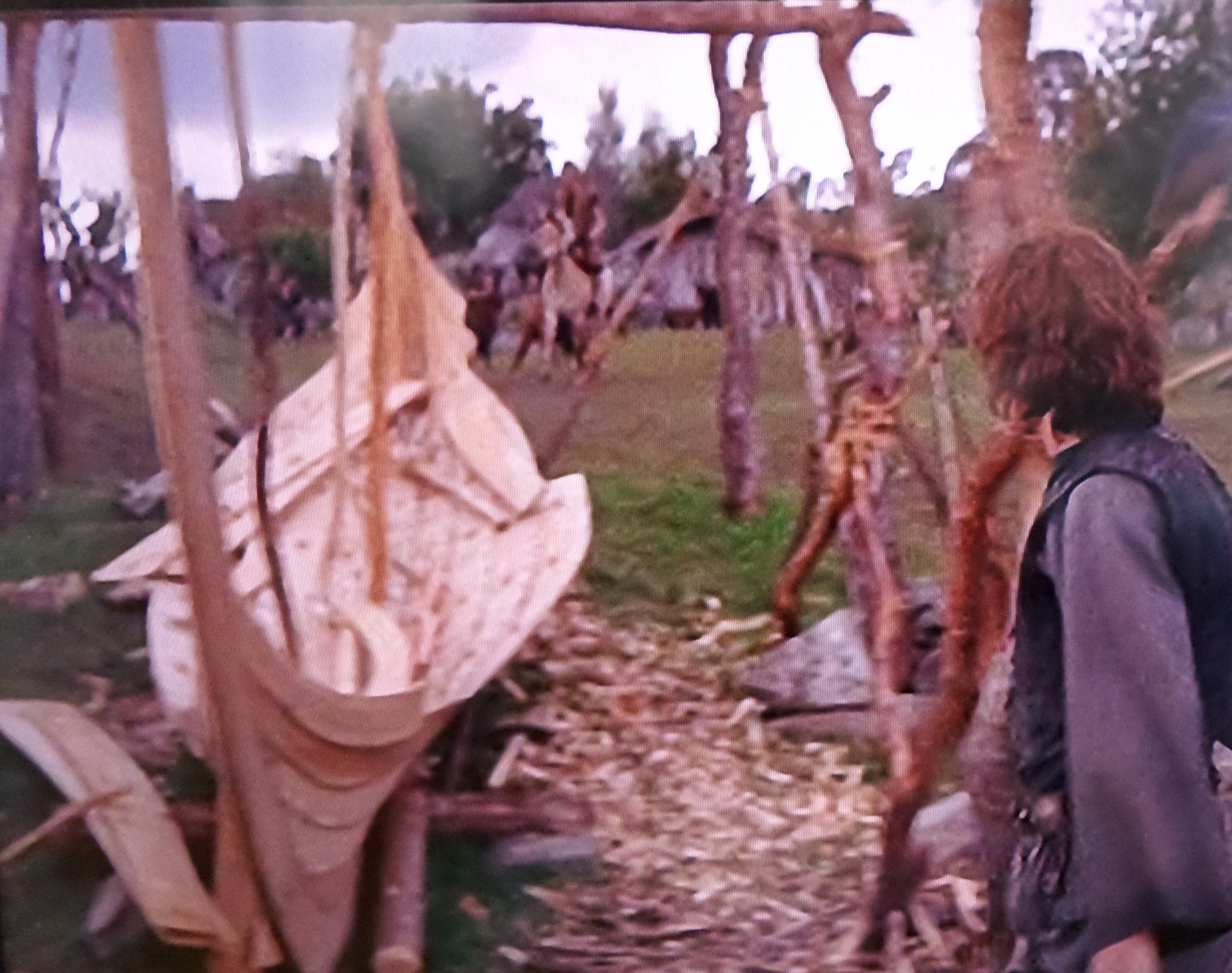 Anglo-Saxons had men with knowledge and experience

Why don’t we do the same? 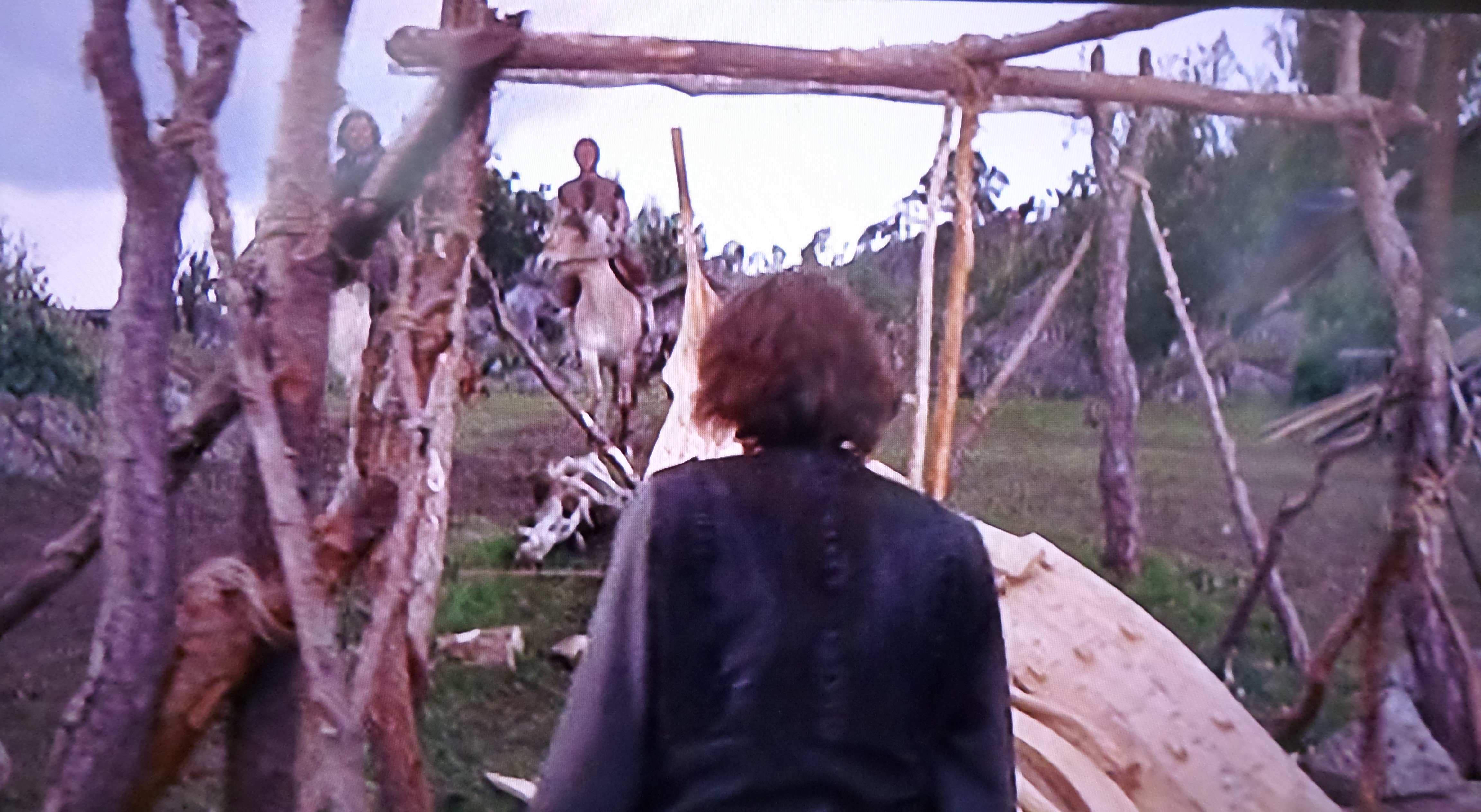 The king would have had his own craftspeople ready to produce any of the things that were needed in his operations. We know from the Anglo-Saxon objects that have been discovered that these people were incredibly skillful. Their metalwork and precious objects show wonderful artistic judgement and the finest workmanship that can hardly be repeated today, if we use only the tools that they had.

The king would decide that he wanted a ship and that it be grander than any other ship possessed by his neighbours. He would call upon his shipwright to make the ship and they would discuss how possible it was to make the craft. How much wood would it take, its length, its width, how fast it would be and where could it go? How long would it take to build it, how many men would be needed to construct it and then to man it? It would be a big project involving the whole of the community and be very costly, rather like building and running a major warship today. Not every group could afford it then, and not every nation can afford to do it now. Obviously you could not build a warship today, but do not underestimate the effort and complexity of constructing this ship. If YOU were asked to build a 27metre wooden ship to be propelled by 40 people could you do it, today? You have an axe – go and do it. Only when you are in this situation, do you begin to appreciate the enormity of the task.

Paul Mortimer dressed in the

How were boats ‘designed’?

The King’s shipwright would have gathered his men together on the beach and scraped a straight line the length of the ship into the sand to represent the keel. Half way along it another line would be drawn at 90 degrees across it (see below). This is the midway or midship frame showing the width or beam of the craft. Using a flexible batten, curving lines could be scraped from the end of the keel out towards the ends of the beam, to show the shape that a seagull might see flying over it. This is the plan view of the ship. At this point the curves could be discussed by sighting along them and moving them in or out a little at different points. It is only strictly necessary to do this for one side of the ship as the other side will be made as a mirror image of the side being discussed. The men perfectly understand the effects of making the ship narrower, or more pointed, wider, or with more rocker. They would be discussing its speed, its ability to carry weight, how it will lift to waves, or how shallow its draught may be and how easy it will be to run it up the beach.

When they were happy with the blend of all their compromises they would return to the midship frame and make another scape in the sand to show what shape it would be when seen from ahead. Again, the shape is discussed to decide how deep it is, how flat the bottom, how curved the sides, as they consider where any deck might come, where seats will be placed and how stable the craft will be. When everything was decided and the shipwrights were happy, they could begin.

This is an age-old process and has been used within my memory to ‘design’ commercial, inshore, clinker fishing boats locally. The boats being built were usually a modified version of another boat already in use; a bit wider, a bit shorter or fuller in the bow or stern.

Setting out the ship

The shipwright had to set out the line of the keel and it had to be straight. How did he do this? Simple really, he had a long string line and a couple of pegs. Secure one end of the string with a peg, stride out the length and attach the string to another peg. Strings and pegs were the essential tools 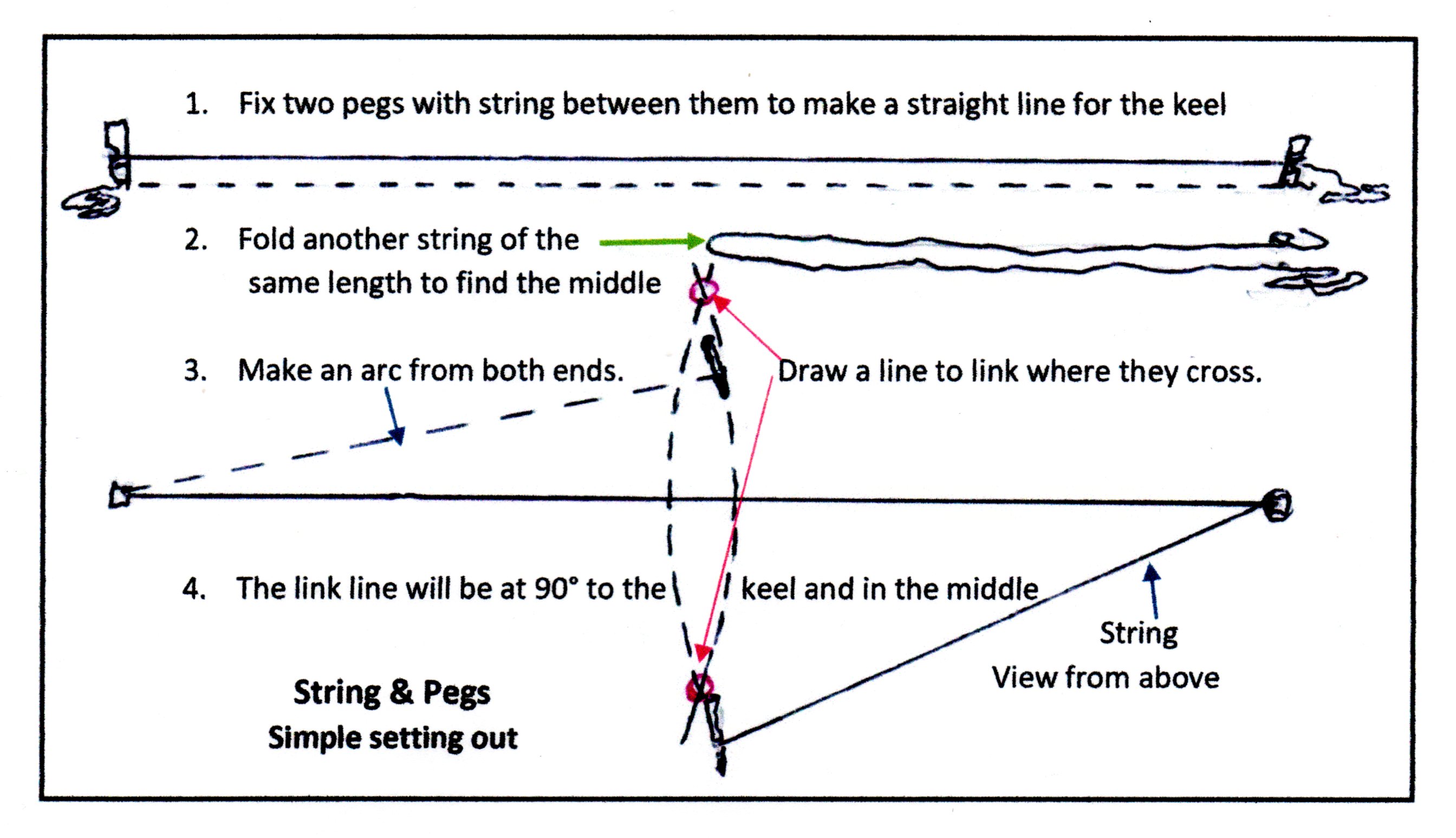 The measurement units used were most probably Roman, as explained by Paul Handley the Naval Architect.

This is what he wrote:

'Measurements of the frame positions taken from the plans showed that the average frame spacing, ignoring irregular spacing at the ends of the boat, was very close to 3 feet (2.994 ft average). (One Roman foot = 11.6 imperial inches, slightly shorter than a modern foot PC.)

This 3-foot frame spacing may be coincidental, but a review of measurements used in Saxon times for land buildings indicated that it was likely that there were two measurement systems in use at the time.

It therefore seems a reasonable assumption that the Roman/current imperial measurement system was used for the Sutton Hoo ship, particularly when further noting that the overall distance between the end-most frames is 75 feet or 5 ‘rods’.

Also, that the average planking thickness is 1 inch based on measurements taken from plank scarf join rivets. And while it could be coincidental, it was noted that the average width of the hull planks in the mid sections is approximately 1 ft.

If this measurement system assumption is correct, then it would suggest that there has been no significant expansion or contraction of the ground over the 75 ft length between the end frames, and that the overall dimensions of the impression may be considered very accurate, perhaps more so than the dimensions of preserved historic wooden ships where timber distortion and shrinkage can lead to considerable speculation over the original ship dimensions and shape, as is the case for the Nydam ship.' (P. Handley Historic Ships Talk to R.I.N.A. December 2016)

Setting out using string lines and pegs is still used today, especially for buildings and brickwork. They check for straight lines, but they can be used for many geometric constructions when they are used like a very large compass (see diagram above). The Greeks and Romans were masters of geometry for structural work and the Roman dimensions are another indicator (with rib-to-plank attachment) of this ship being built in this country. 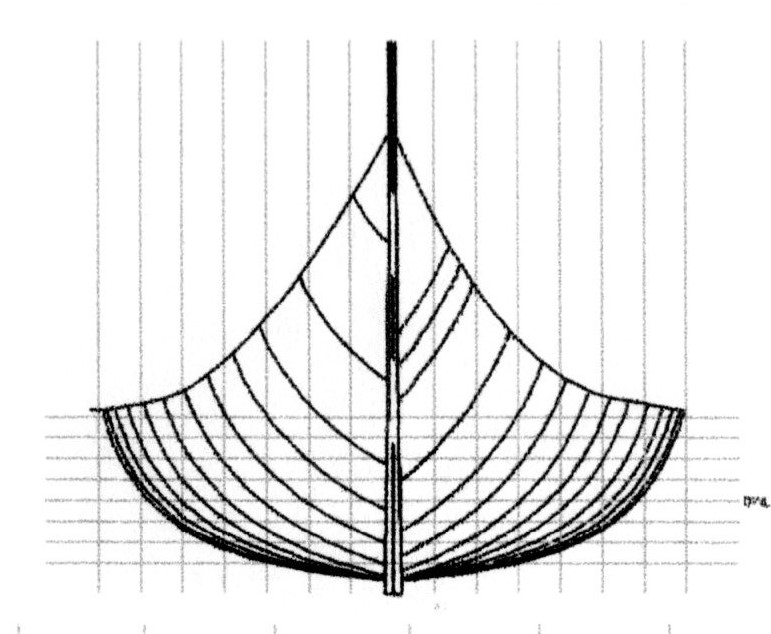 How do we make drawings of boats?

These curving lines are the shape of the ship at different places all along its length.

Each curve is then numbered, because they coincide with the ribs of the ship. As there are 26 for this ship, number 13 will be the midship curve, also called a section. The curves gradually change shape as they move towards the bow or the stern. The curves are drawn on a grid (below left). The lower horizontal lines are called waterlines. The curves are then numbered. Numbers 1, 2, 3 are at the bow and 24, 25, 26 are at the stern. A measurement scale is added to the drawing. In the example (right), just the bow sections are drawn and one section at number 8 is indicated. 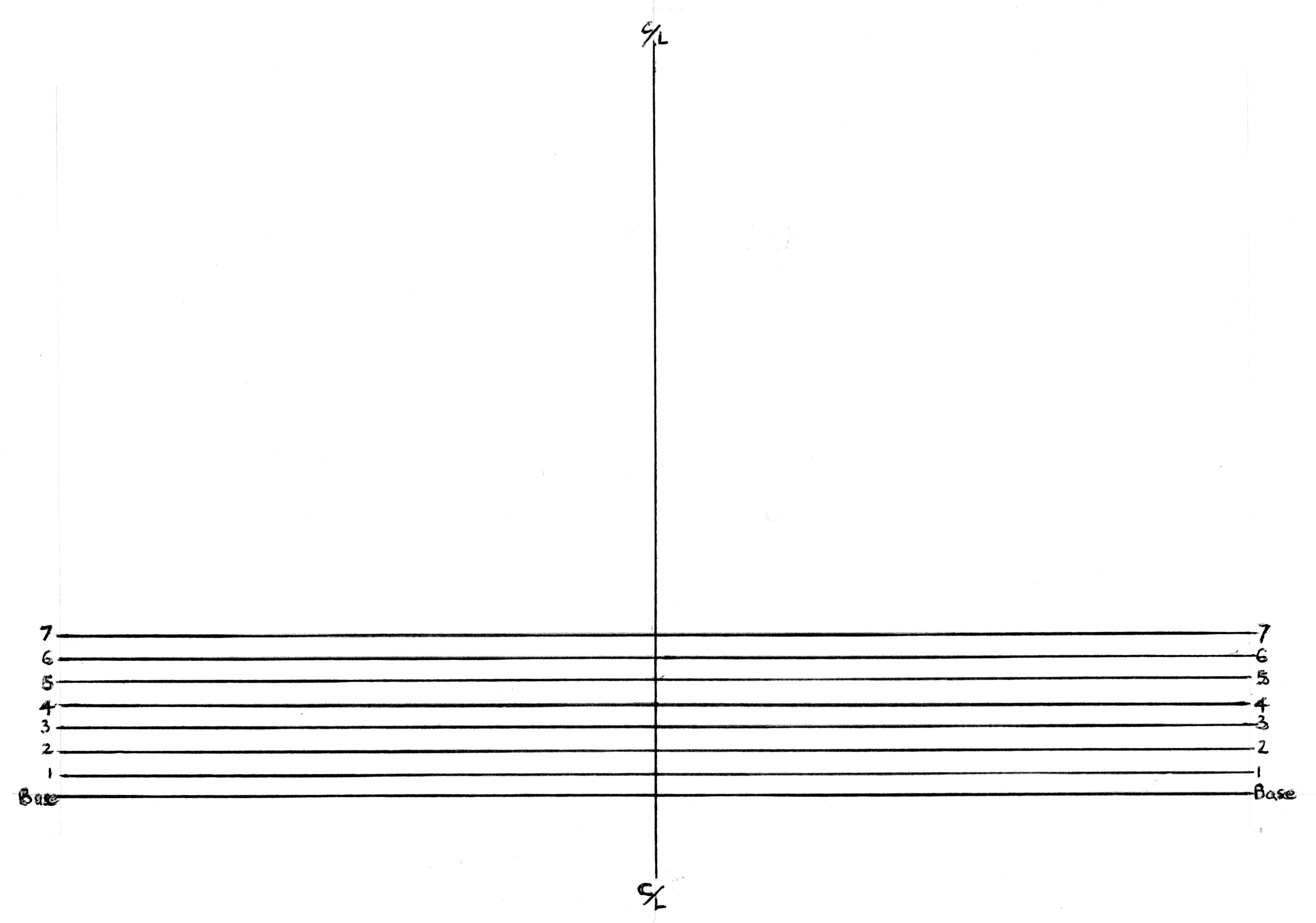 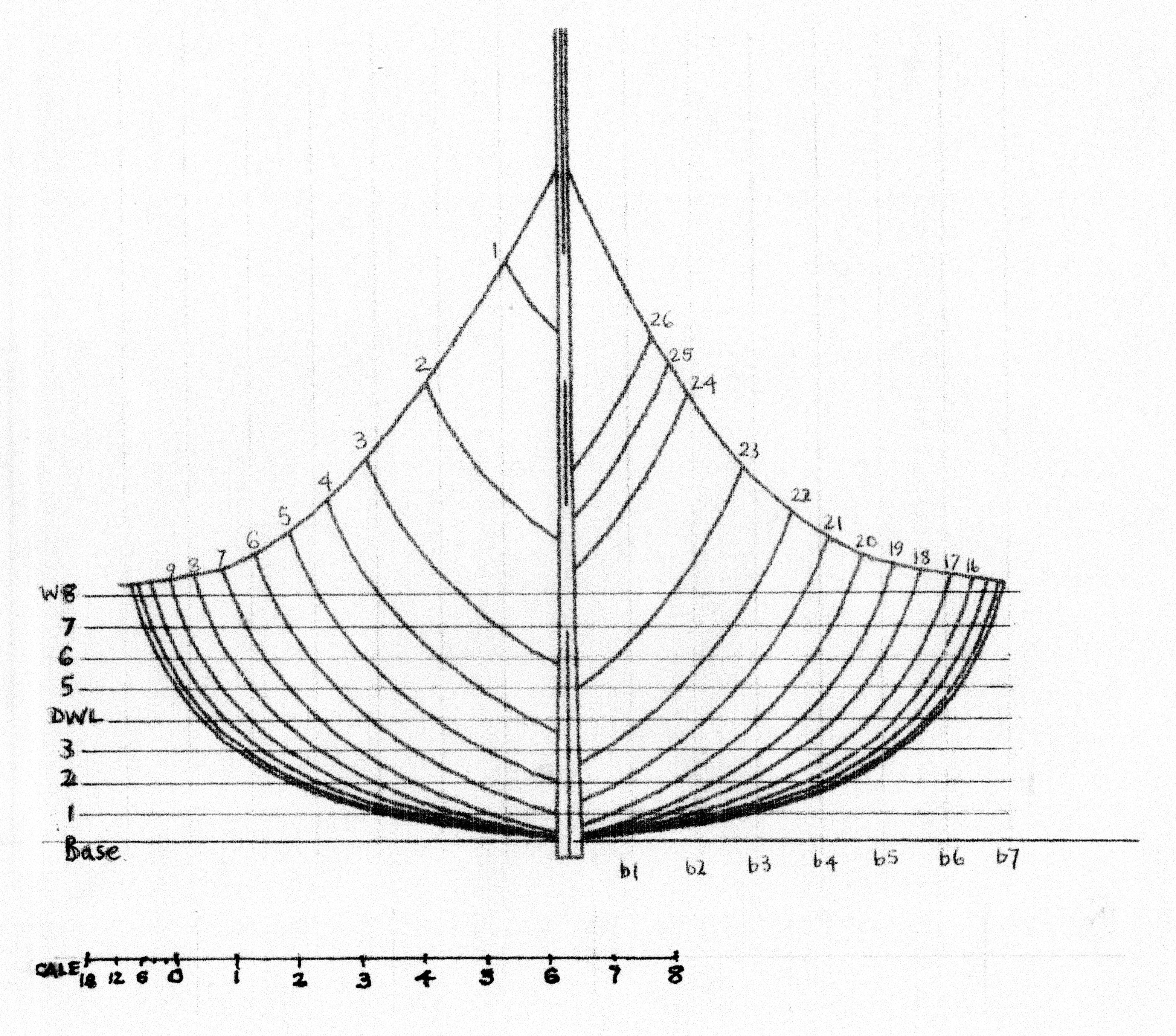 A view of the side of the ship shows where the frames are to be positioned. (P.Handley)

If the shape of each frame is copied (top right in left picture below) and then slotted onto the side view of the ship, as in this model (5th Woodbridge Sea scouts), the form of the ship can be seen. This is how the ship can be visualised. All that remains to be done is to make the frames full size instead of to scale. 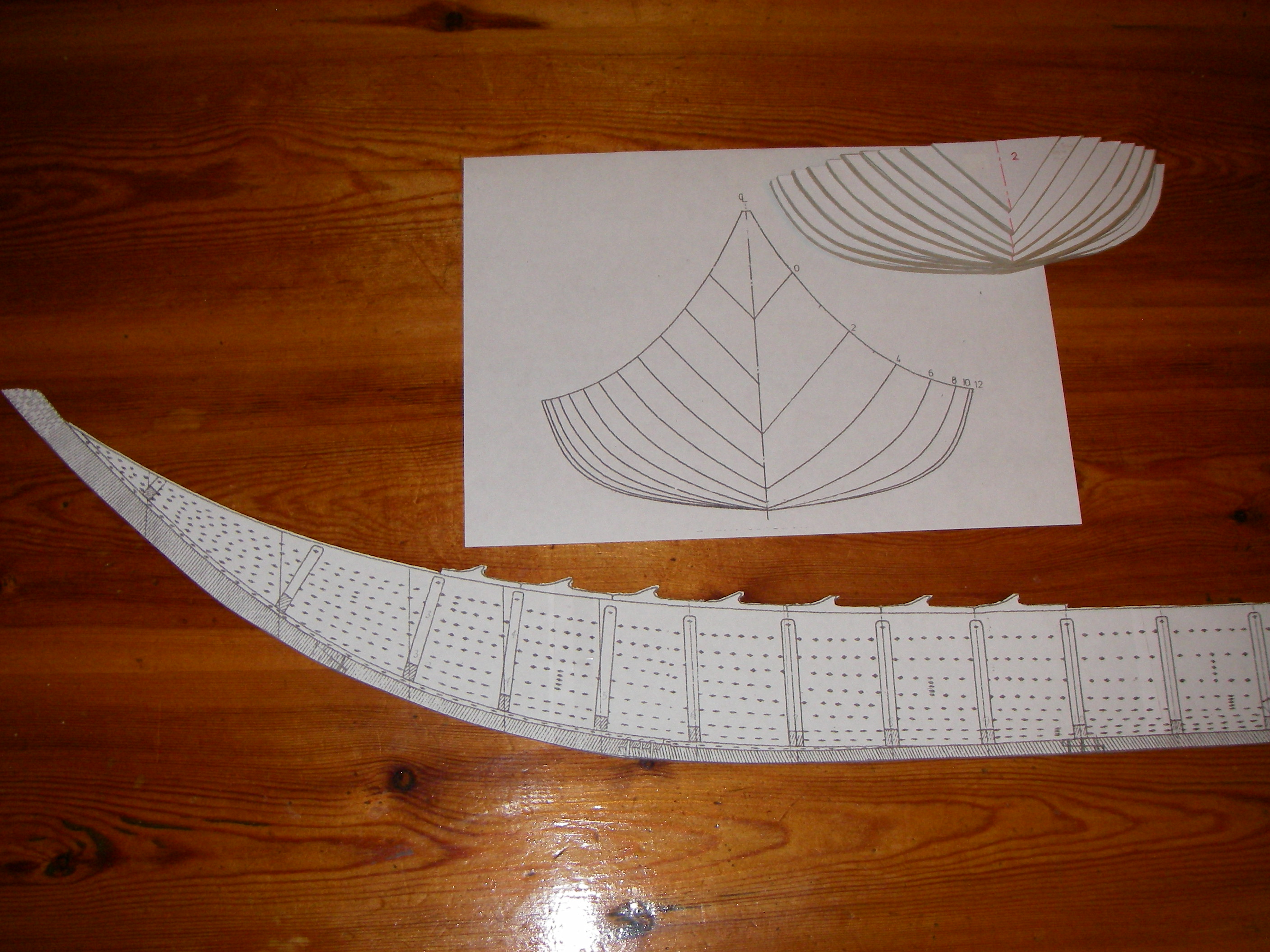 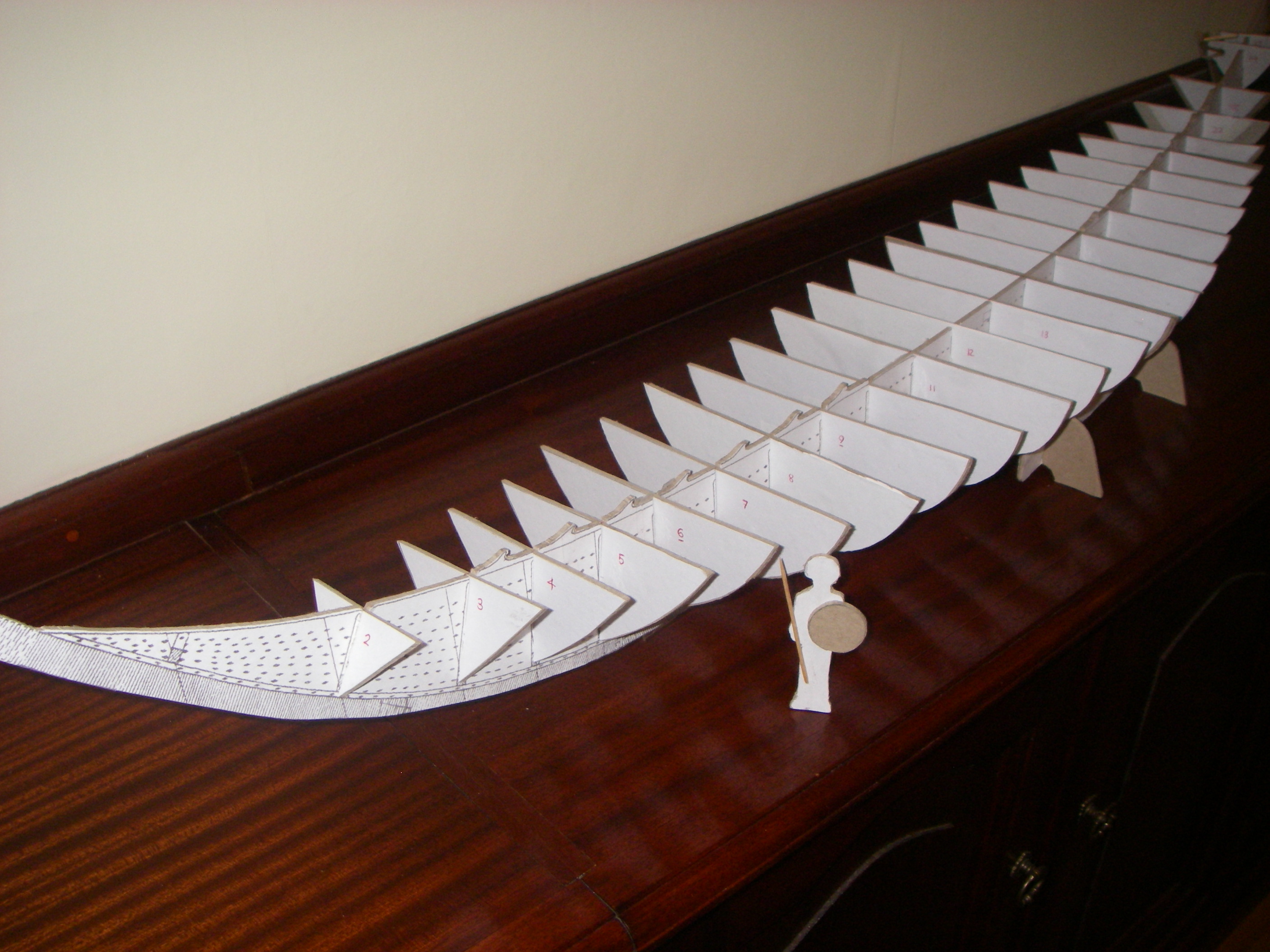 Now that we have an understanding of the process, we can look at the making of that single frame Number 8 almost as the Anglo-Saxons would have seen it.