How to Build an Anglo-Saxon ship

2. From Drawings to Construction

The main purpose of recording the previous Investigations was to illustrate the complexity of the research that underpins the modern construction of the Anglo-Saxon ship. When the research reaches a point where the build can begin, it is time to start work on the ship. The main purpose of this section is to explain the principles behind translating drawings into pieces of wood through models and lofting with reference to how the Anglo-Saxons might have organised these steps.

As explained in Shipshape 1 we use drawings to work out what shape to build the ship. 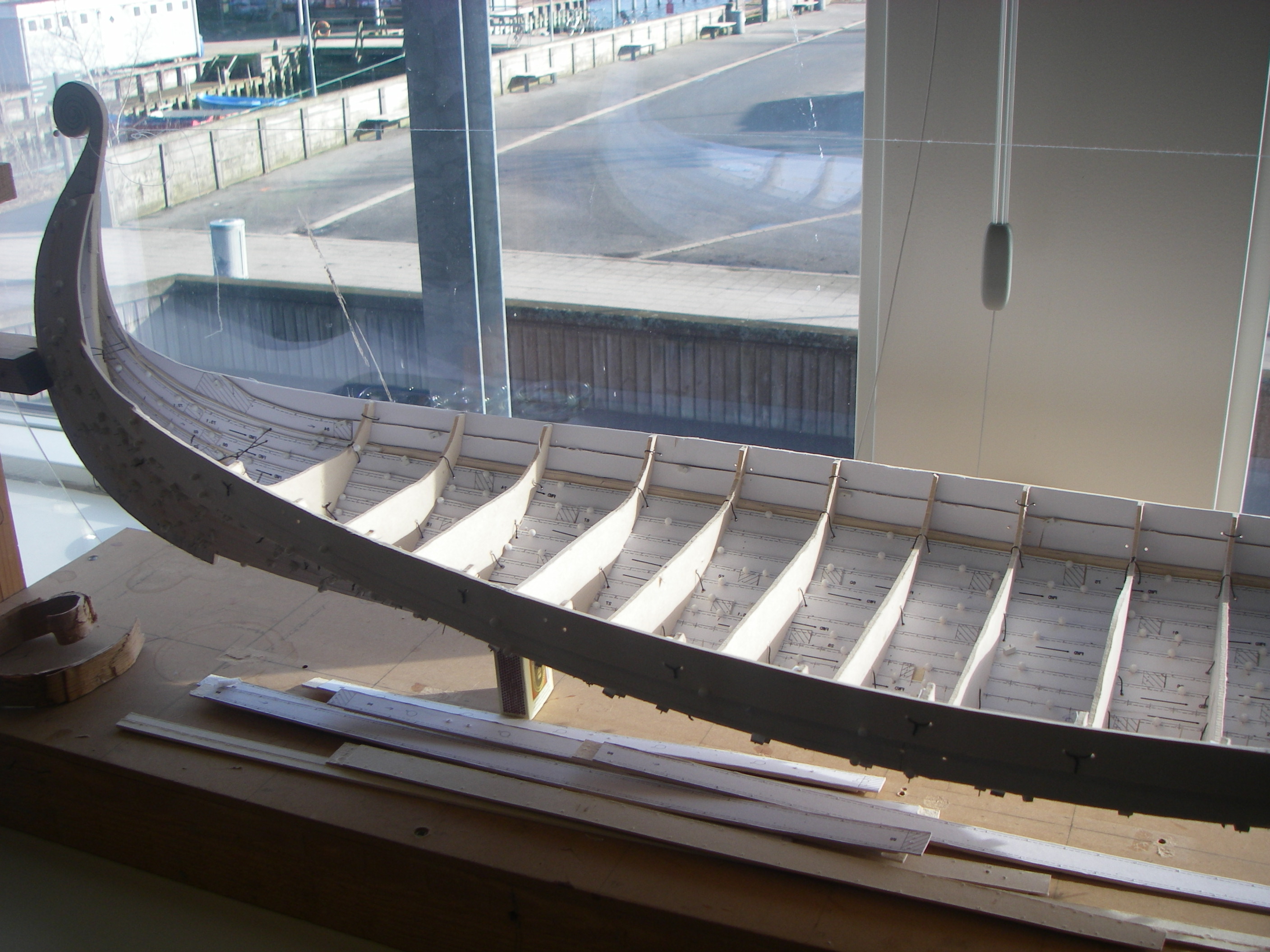 If we want to check the drawings, we can make models of the ship. This is a very important process. To make an accurate model takes great skill and the model maker will have to make virtually all of the decisions about the ship build that will have to be made on the actual craft.

Edwin Gifford made Sae Wylfing as a half-scale model of the Sutton Hoo ship, but before that he made a quarter-scale model to check that his calculations were correct. Edwin did not make the whole-ship model, only half the craft needs to be modelled as the other half will be the same. On the right is Edwin's model lying on its side. It is still attached to its building platform and the internal mould-frames which give it its shape. In the Viking ship museum in Roskilde there are a number of models that have been used to calculate the hull shapes of their craft and one can be seen above left.

Any drawings are quite small and need to be scaled up – made bigger. To make them the correct dimensions we carefully measure the small drawing then multiply the measurements to make them full size. If the ship drawing was 1 metre long and the boat had to be 30 metres long, we would just multiply the drawing length, by 30. This is easy to understand. If we did this a single measurement at a time it would be a slow process, so all the measurements are taken, then multiplied and written down in a list The list, which can take many forms, is called a ‘table’ – a Table of Offsets. It is the job of the naval architect to do this as will be seen below. This is particularly important if we are trying to draw curved shapes. How can we measure a bend or curve? 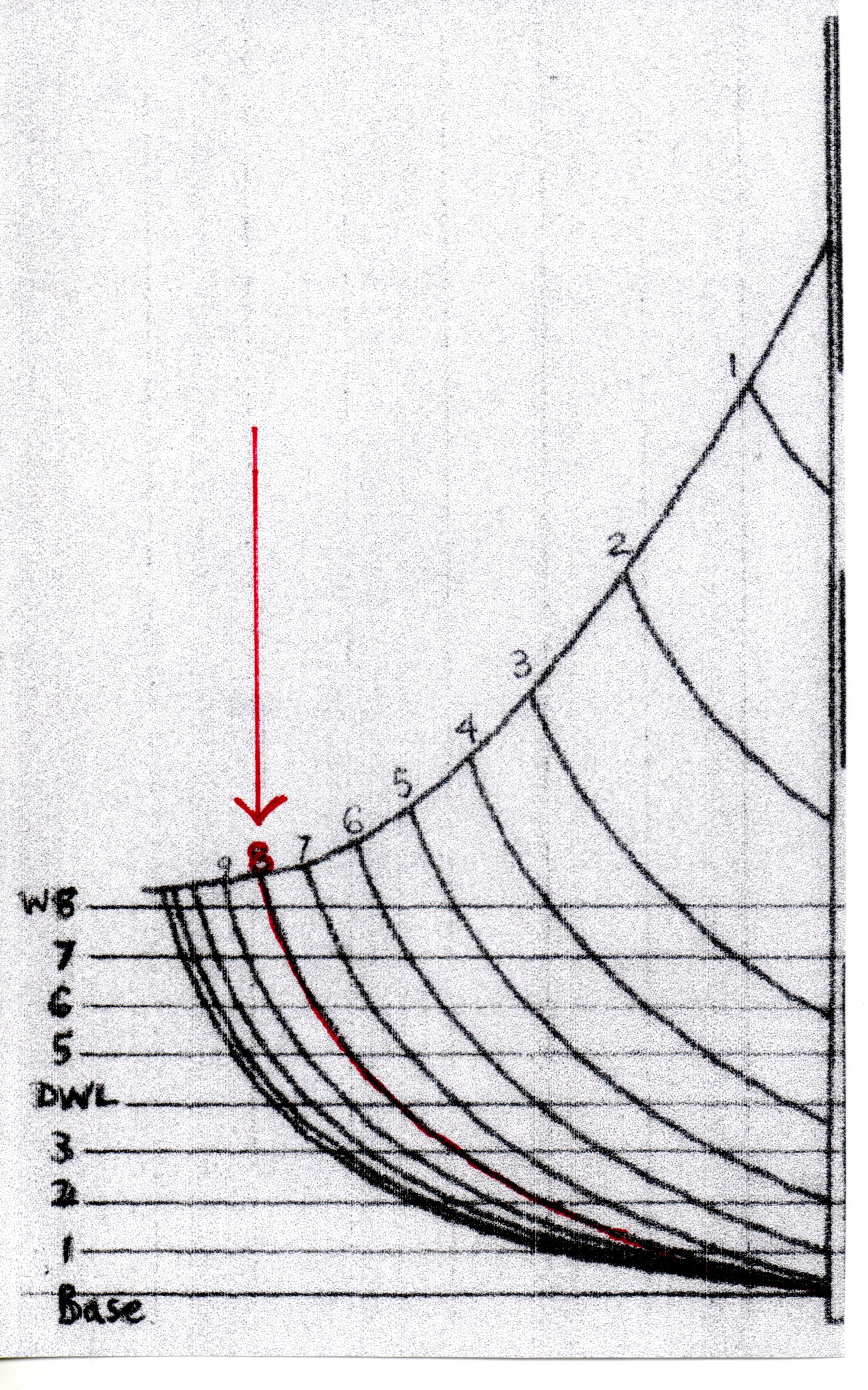 We draw lines, called waterlines, across the curve, spaced at set distances apart (see Shipshape 1). On the small drawing they may be 5mm apart. We then measure along each waterline to find where it crosses the curve of the ship and record all these distances. The lengths are measured from the centreline of the ship. We then have to draw the waterlines again, but this time they may be 150mm apart not 5mm. As 150mm is 30times bigger than 5mm, the drawing will be much bigger this time. This drawing process has been used since medieval times and it is called Lofting. For a big ship the shapes were drawn on the floor of a large room just below the roof where there was sufficient clear space. This floor was called the ‘loft’ a word still in use today. For the Anglo-Saxon ship we don't need a whole floor, we can use lofting boards - big pieces of wood. On the right we can see half of the craft with the curves of the numbered ribs. One highlighted rib at No 8 is indicated. The waterlines are drawn across the ribs. They are numbered and waterline 4 is marked DWL. This is the place where calculations show the actual waterline to be. The ship will sink into the water to this line.

A reminder that the Anglo-Saxons would not have used drawings. Today, the Naval Architect studies all aspects of the research and produces Lines plans. These are scale drawings showing the shape of the craft with a smooth skin. The planking has to be added later. Paul Handley produced these drawings based on his comprehensive research. 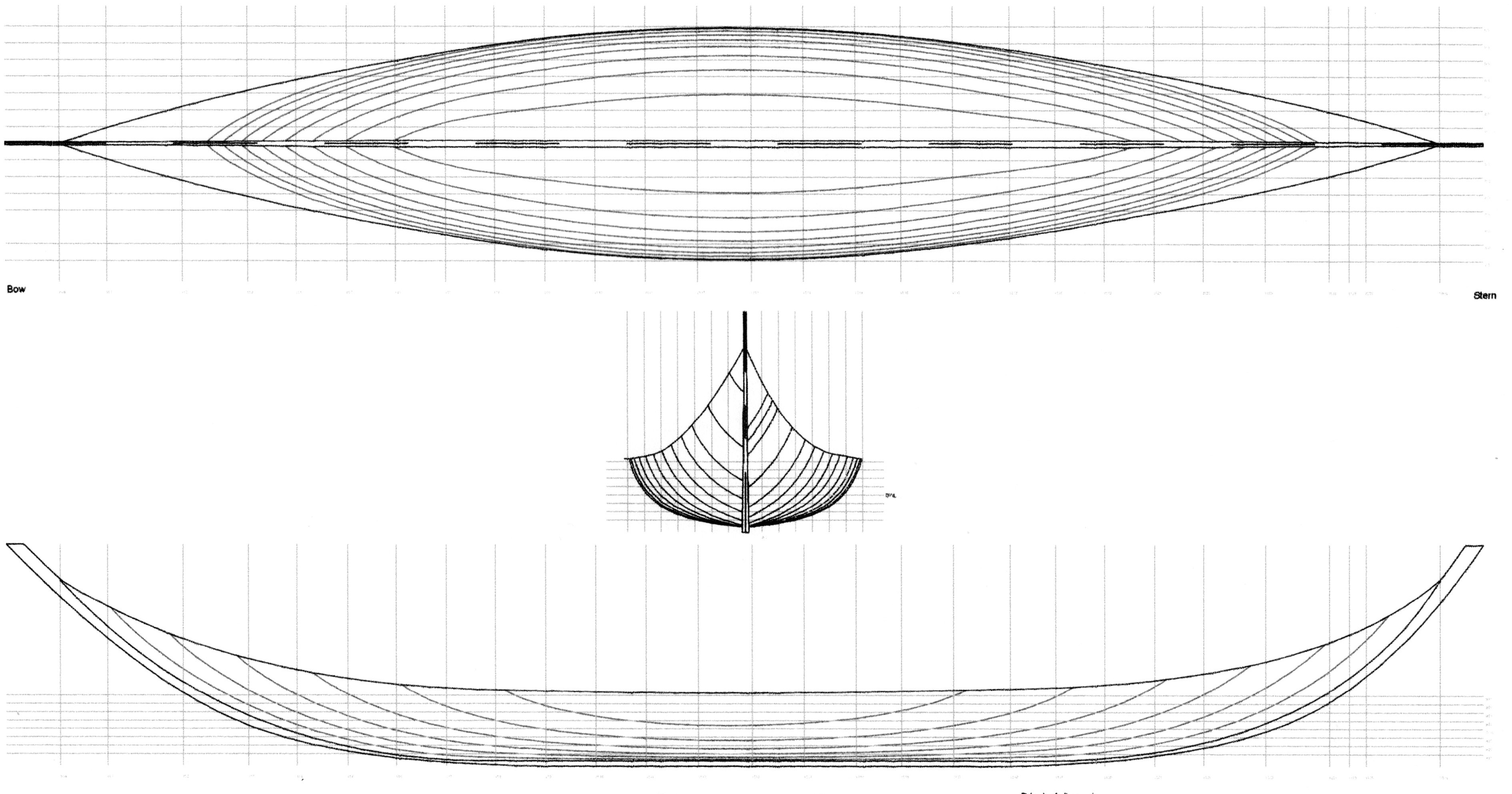 The central drawing is one that we have seen before at the conclusion of Inv 6. The Hull Shape. It is shown being compared with the original drawings made by the excavators in 1939 to illustrate the corelation between his conclusions and the original measurements made on site. A Lines drawing such as this would eventually allow the shape of the ship to be made, by building a modern ‘skeleton’ of frames to put the skin onto. The skin will be the planks. The Lines drawings are small and must be made much bigger.

This is an outline of the process, to sketch in some of the steps involved in the build as it might have looked to the Anglo-Saxons, but it must be said that they would not have been inside a shed with a concrete floor. They would have been in the open, probably on a beach at the side of a river. They would have cleared the ground and tried to get it as level as possible. Their alternative would be to construct a level platform on the beach as a base from which to work, rather as Edwin Gifford did when making his quarter-scale model mentioned above.. We are making many more frames to guide the build process than the Anglo-Saxons would have done. This is for reasons of accuracy as has already been explained.

Hull Lofting.  Mr Handley supplied a long list (Offsets) of measurements of the full-size shapes taken from the Lines. The builder’s task is to draw the given Lines dimensions onto a large board using a technique similar to the game of ‘Battleships’, where letters are marked on squares up the side of a grid and numbers are marked on the squares across the base of the board. Each pair of measurements A2, C9, etc produce a small cross on each location. 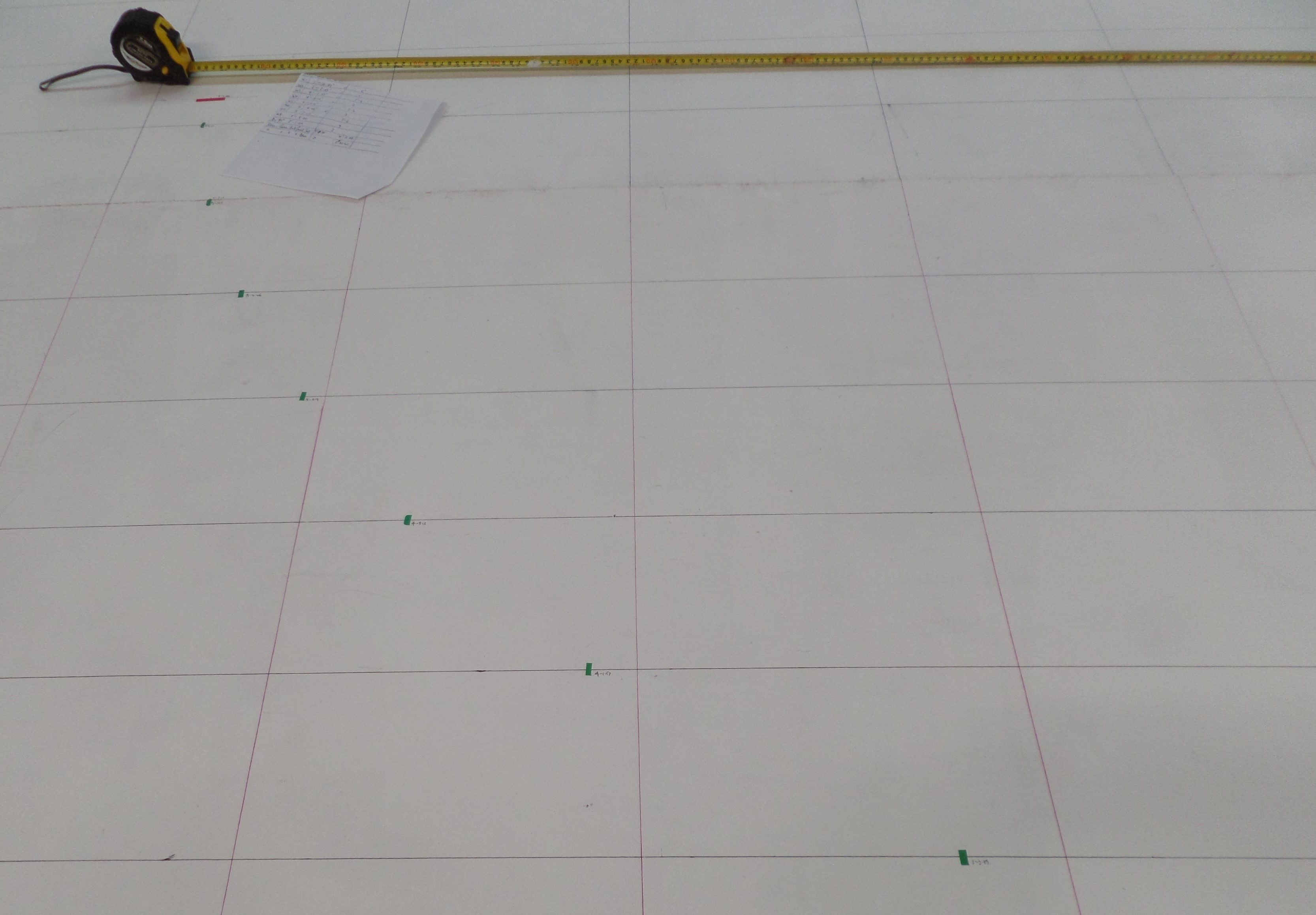 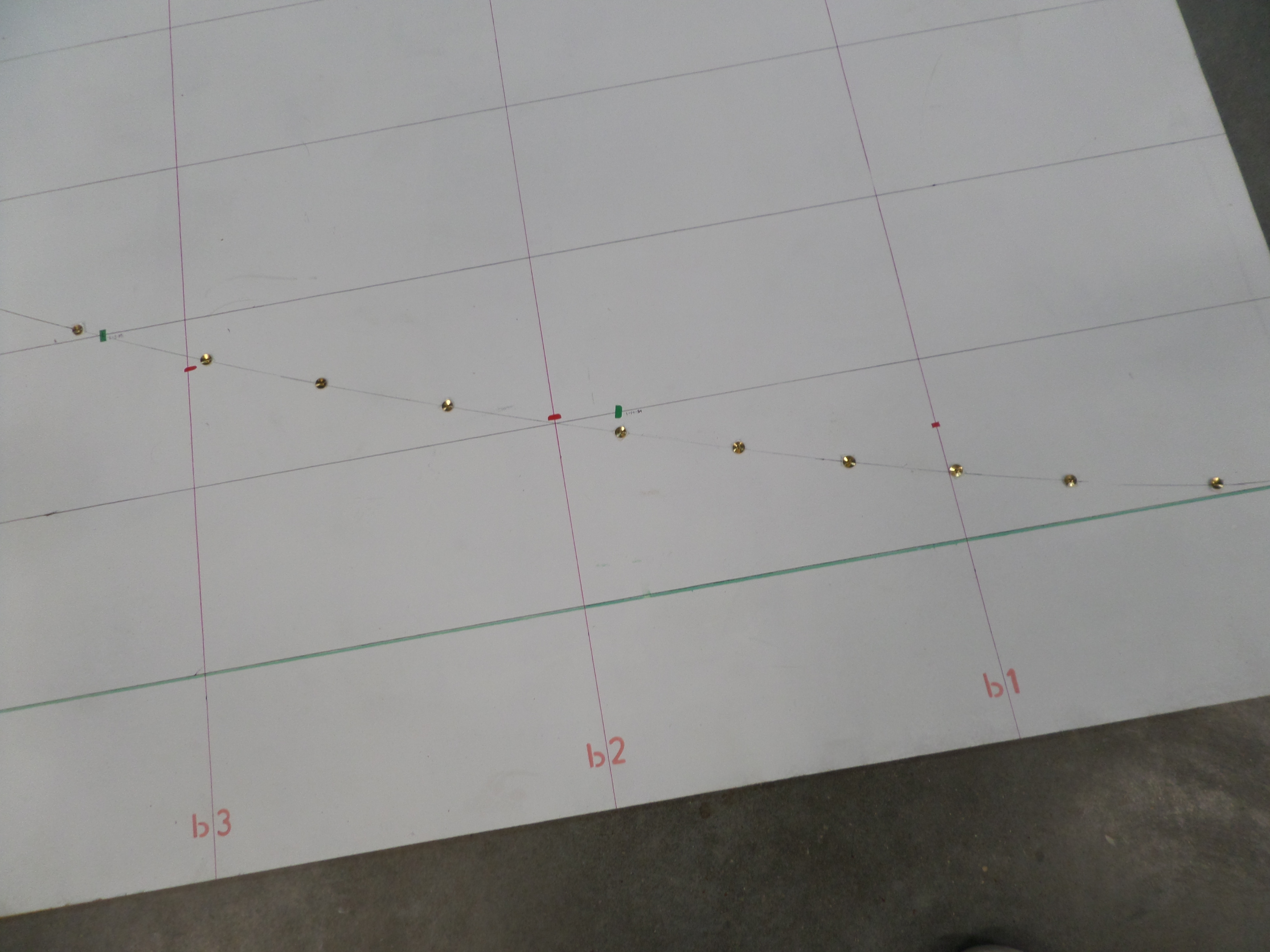 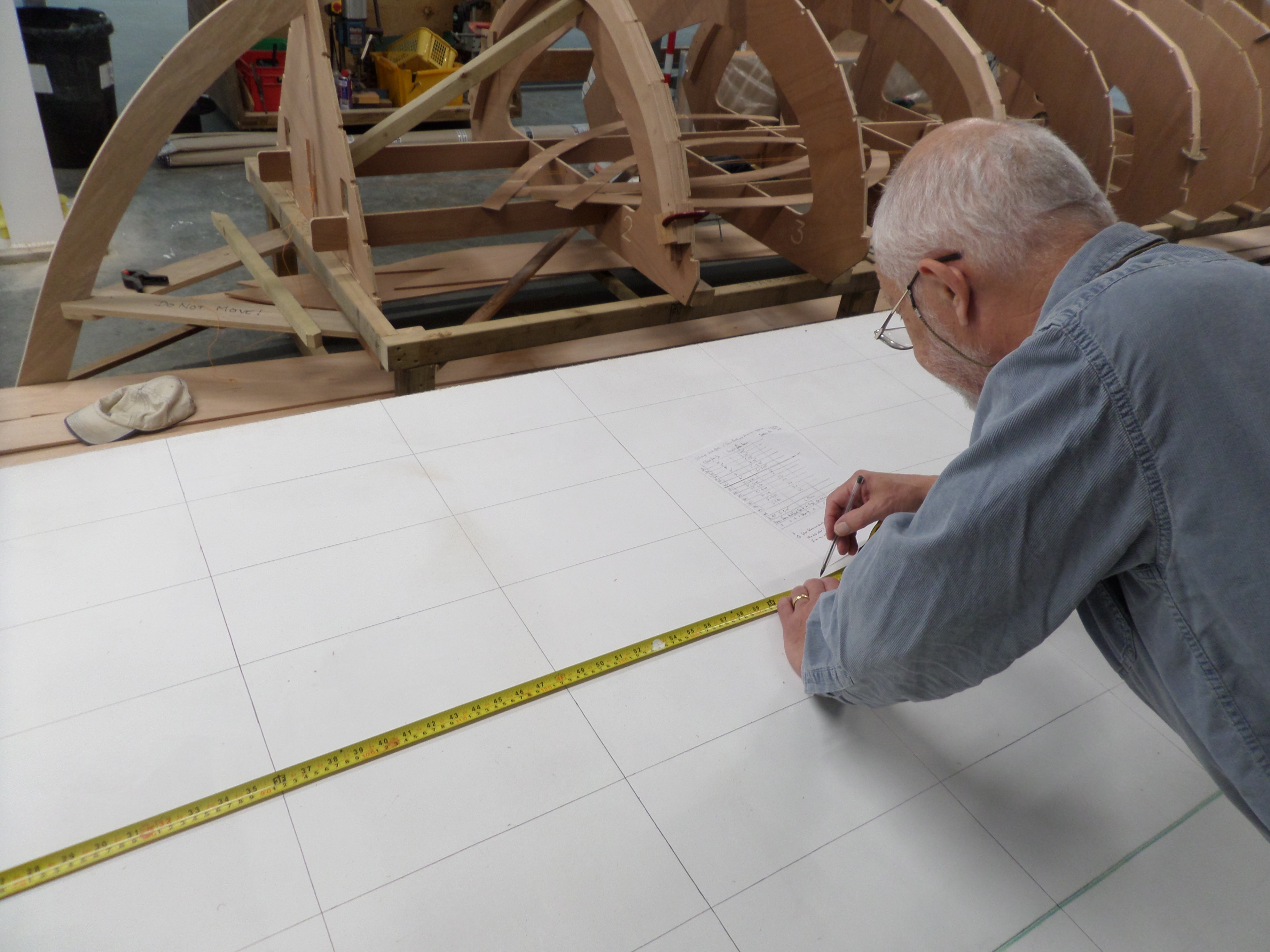 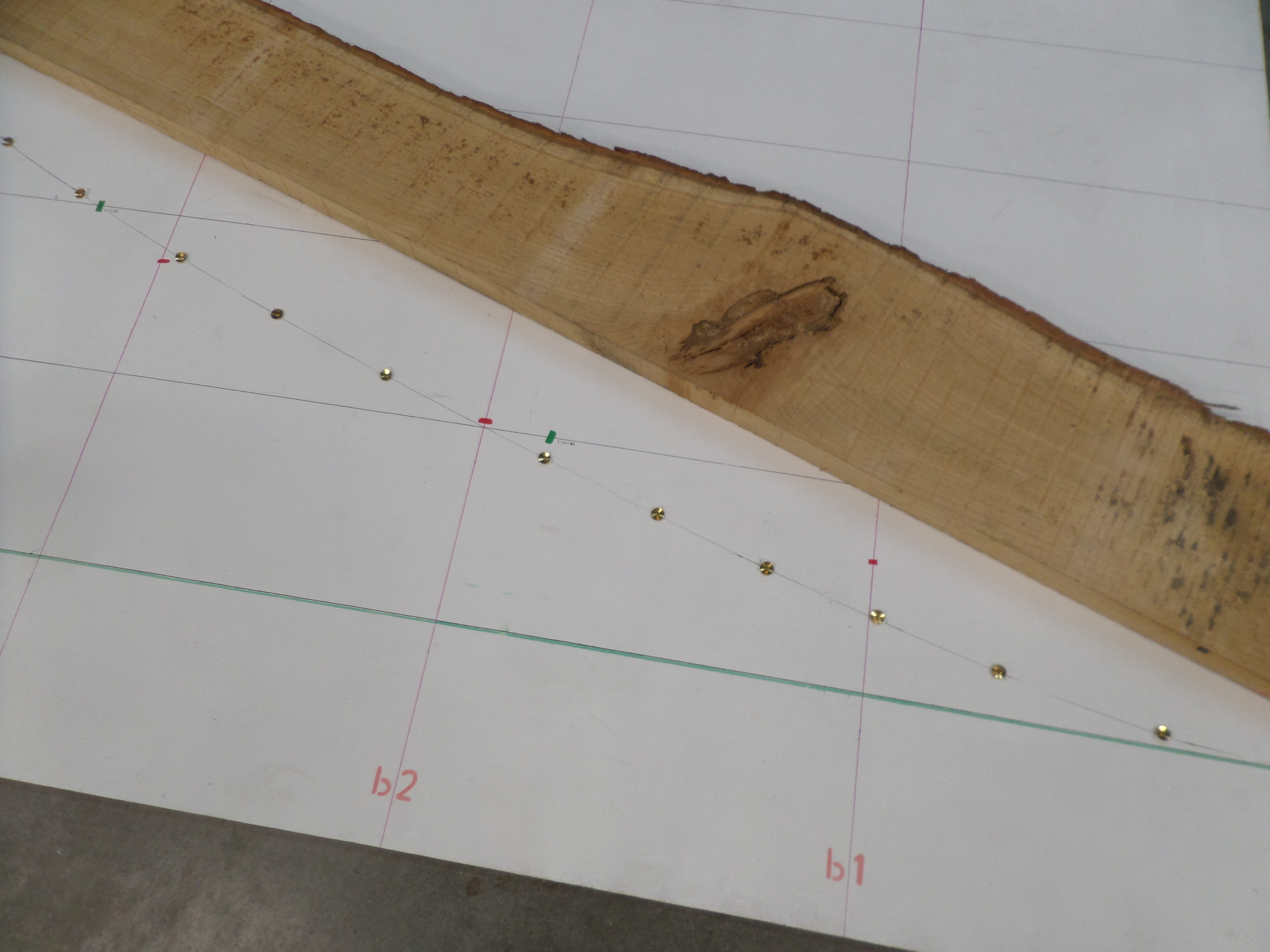 When all the crosses have been marked for the edge of a guiding frame, it is a case of join-the-dots to make the curved shape of the ship frame. This is the process of Lofting the ship as mentioned above. It is tricky to photograph this process, as the board is so big and the dots are so small. Note. The craft in build in the picture above right is not the ship, but a St Ayles skiff that has all the frames set up on a level platform.

Making Frames. The curves on the loft board have to be transferred onto wood to make the guide frames. Reminder: these frames will NOT be part of the ship. They are meant to show the ship’s shape, so that the planks can be bent around them. This allows us to use modern tools to make the frames. To mark the shape onto wood one modern way is to use drawing pins. Lay them on the lofted line, put the frame wood on top and press down. The pins copy the line location onto the wood. Join them up, remove the pins and cut the wood to this shape. Nail heads can be used in a similar way. This will be the shape of one half of the side of the ship. Draw round the curve onto another piece of wood, to make the shape for the opposite side of the ship. These curved pieces can be lain onto the loft drawing to check that they are correct. 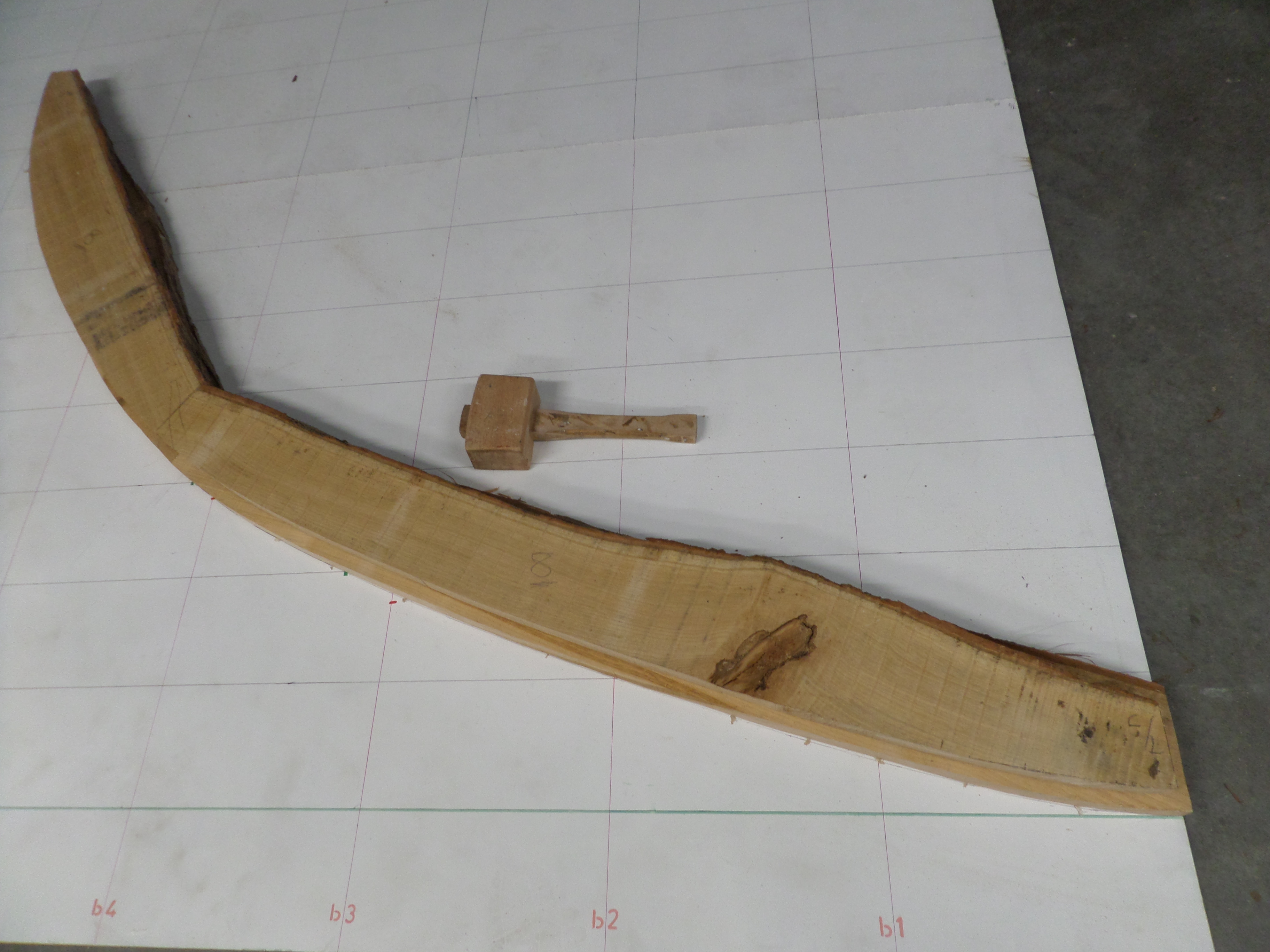 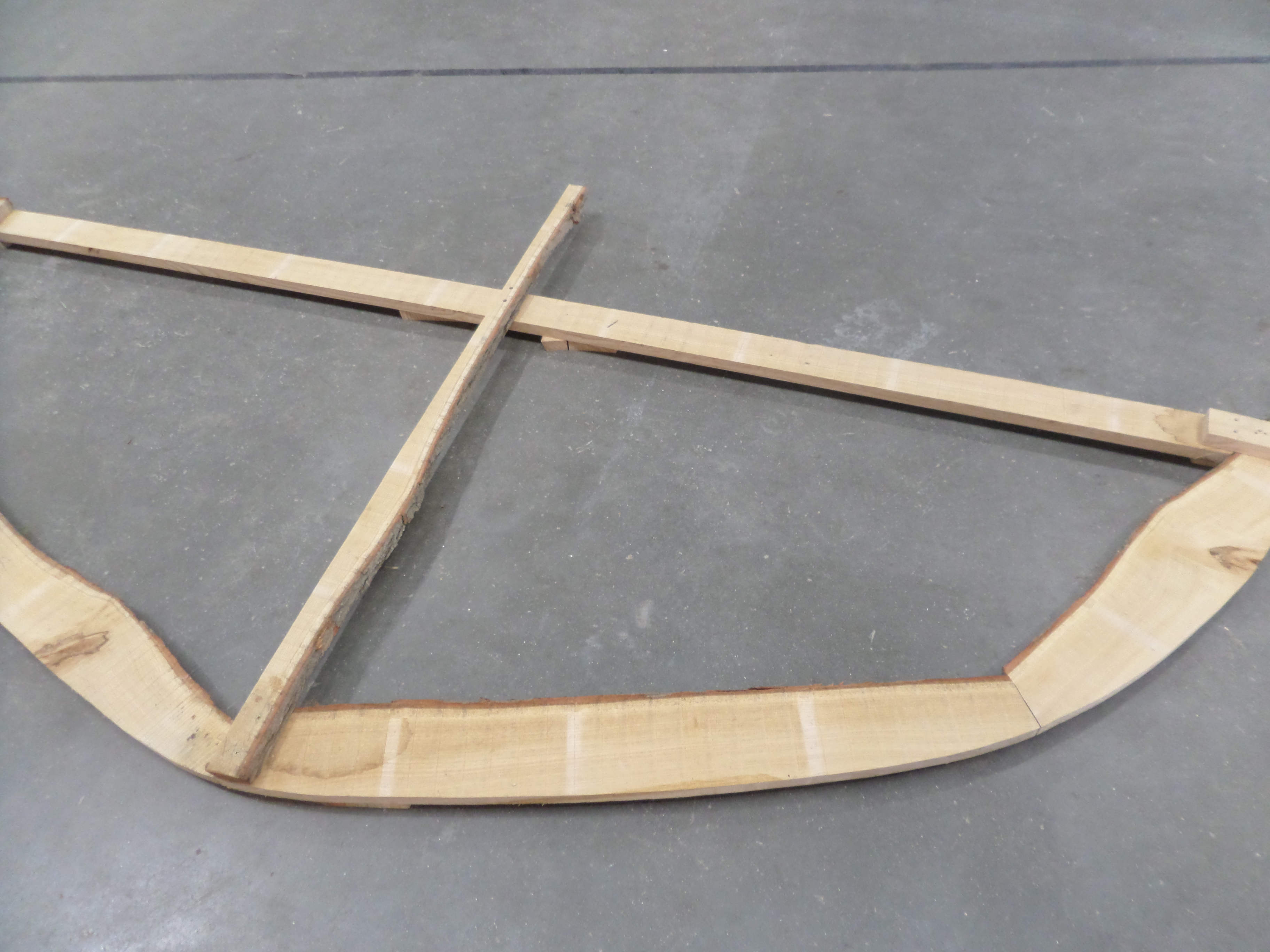 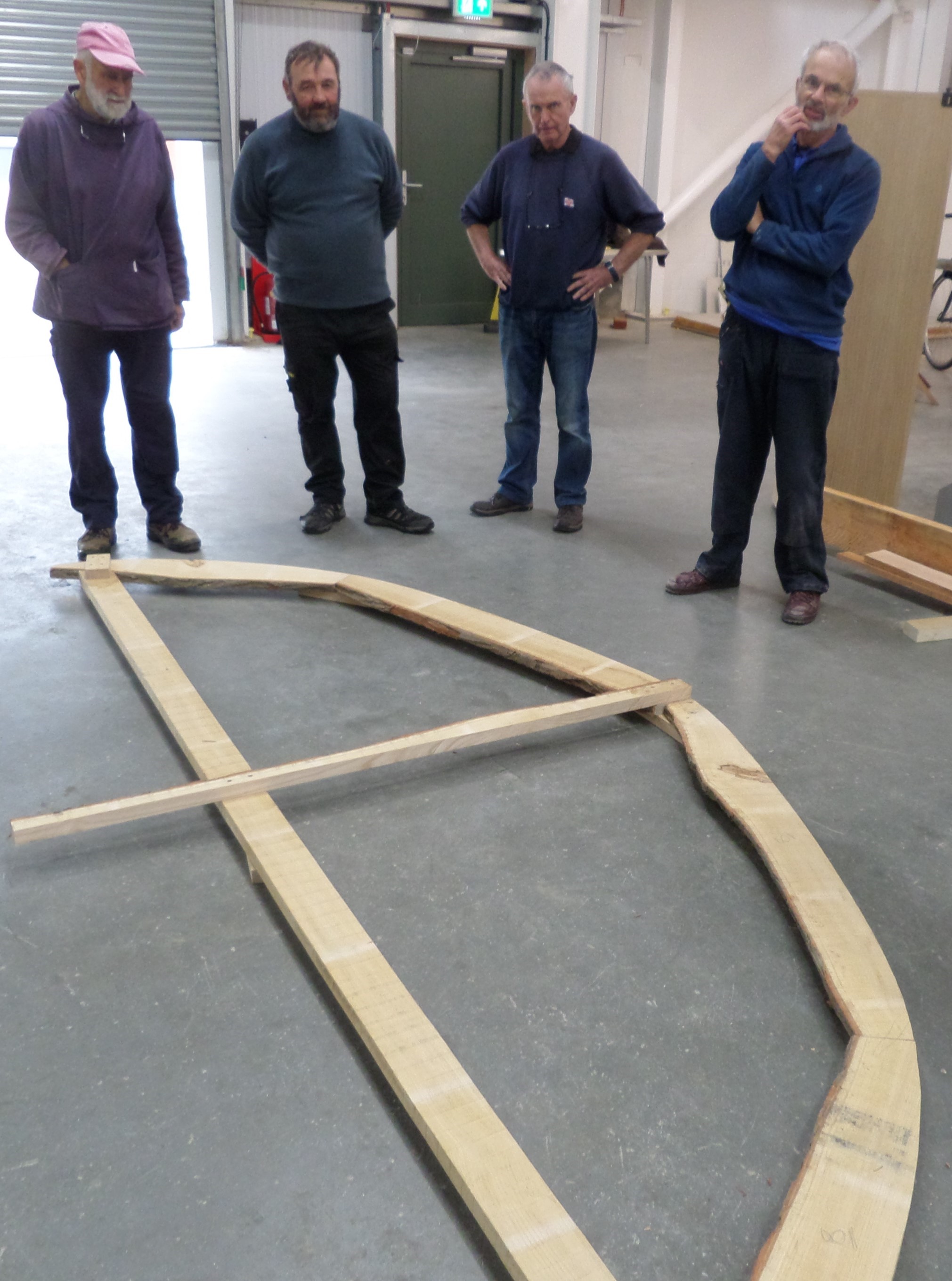 They have to be secured to each other at the bottom and then a stick has to be attached across the top to hold them the correct distance apart. Finally, another upright stick is fixed in the middle. One edge of this stick is exactly on the middle line of the ship, as it will be used to check that all the frames are lined up properly with each other. Enough shaped frames have to be made to guide the planks to the proper hull shape. Half a dozen would be enough for this ship.

This shows how the Anglo-Saxon ship could be built

Setting up. Let us say that six frames have been made. They would now be set up and secured. Clinker-built ships have to be built 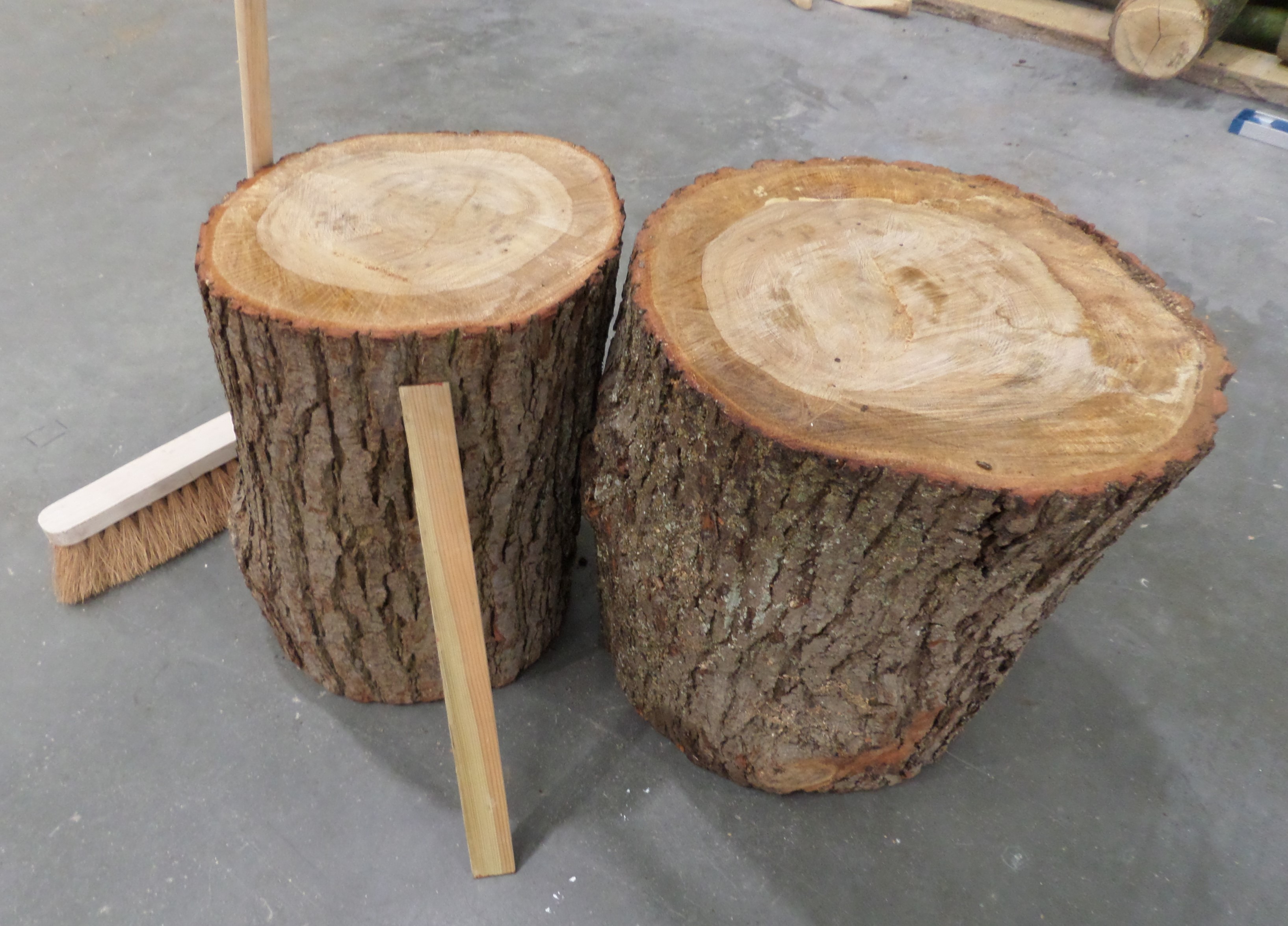 the right way up. When the planks are being fitted one person will work from the inside and another will be on the outside. The person outside the ship must have working room below the hull. The ship must not be on the ground, but lifted up to create this working space, so large blocks are put in place, made level and then the keel is laid on top of them. The blocks can vary in height to be lower in the middle of the ship. This will allow the keel to sag downwards a controlled amount to produce 'rocker'. The ship does not have a totally flat keel.

Stem and Stern. Long curving pieces of wood that make the stem and the stern timbers must be added to the ends of the keel. They have to be supported with shore-timbers each side and jointed to the keel. These three timbers, keel, stem, stern, will be used in the actual hull of the ship, so it is necessary to make them in an authentic manner using Oak as will be seen. It is possible to make the curved shaped stem and stern in two pieces each. More of this later. 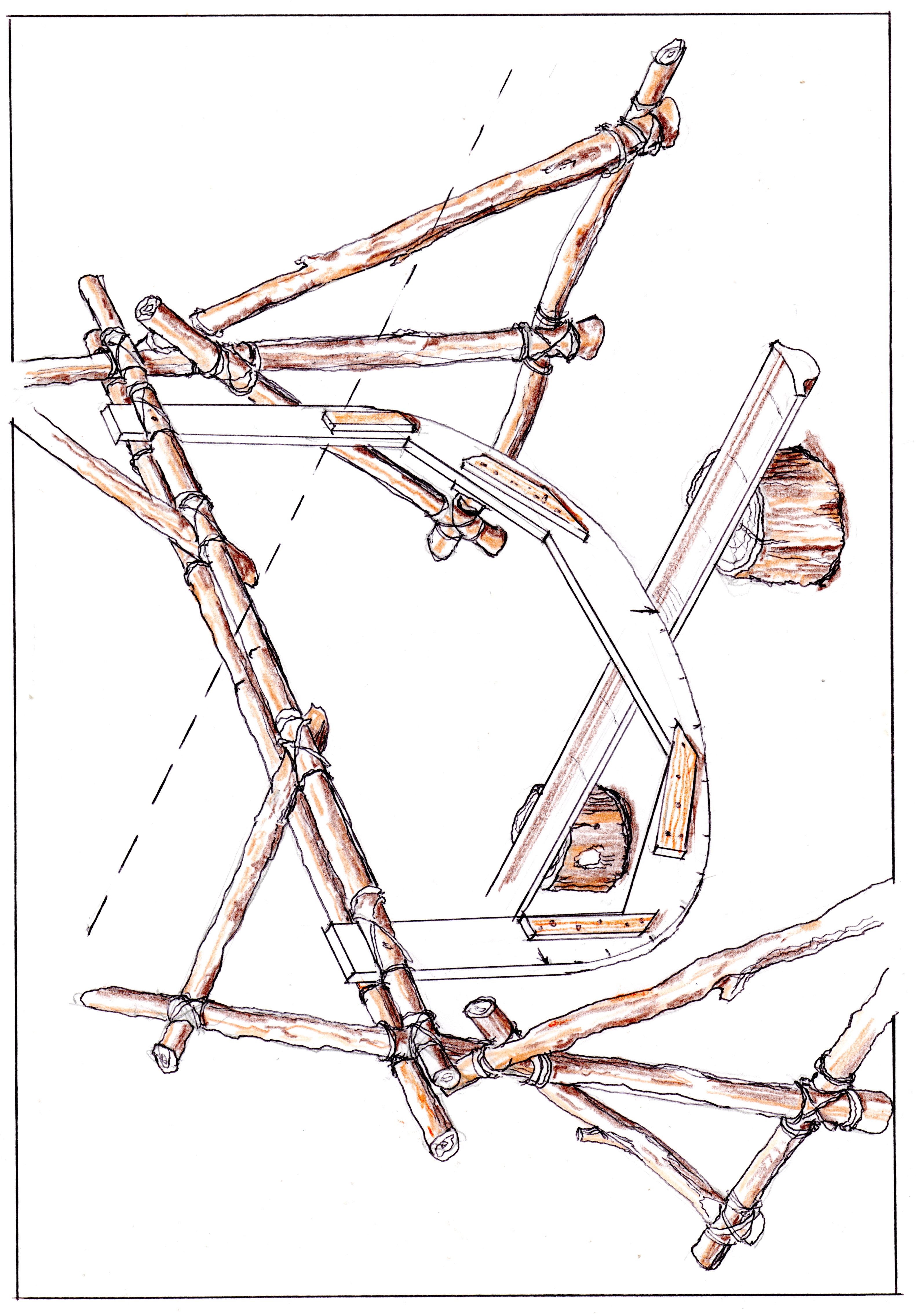 Frames. These are not included in the hull, so they can be fabricated from other timbers and be made using modern tools to speed up the process. The full-length keel would be marked out to position the build frames evenly. The most important frame is always the midship frame.

The frame must be sitting on the keel. It must be upright. Today, this can be done with a spirit level, though the Anglo-Saxons would have used a plumb bob, which is just a weight on the end of a piece of string. The frame is secured with poles, forming a triangle, propping it up on either side. Triangles are very strong, because they keep their shape and do 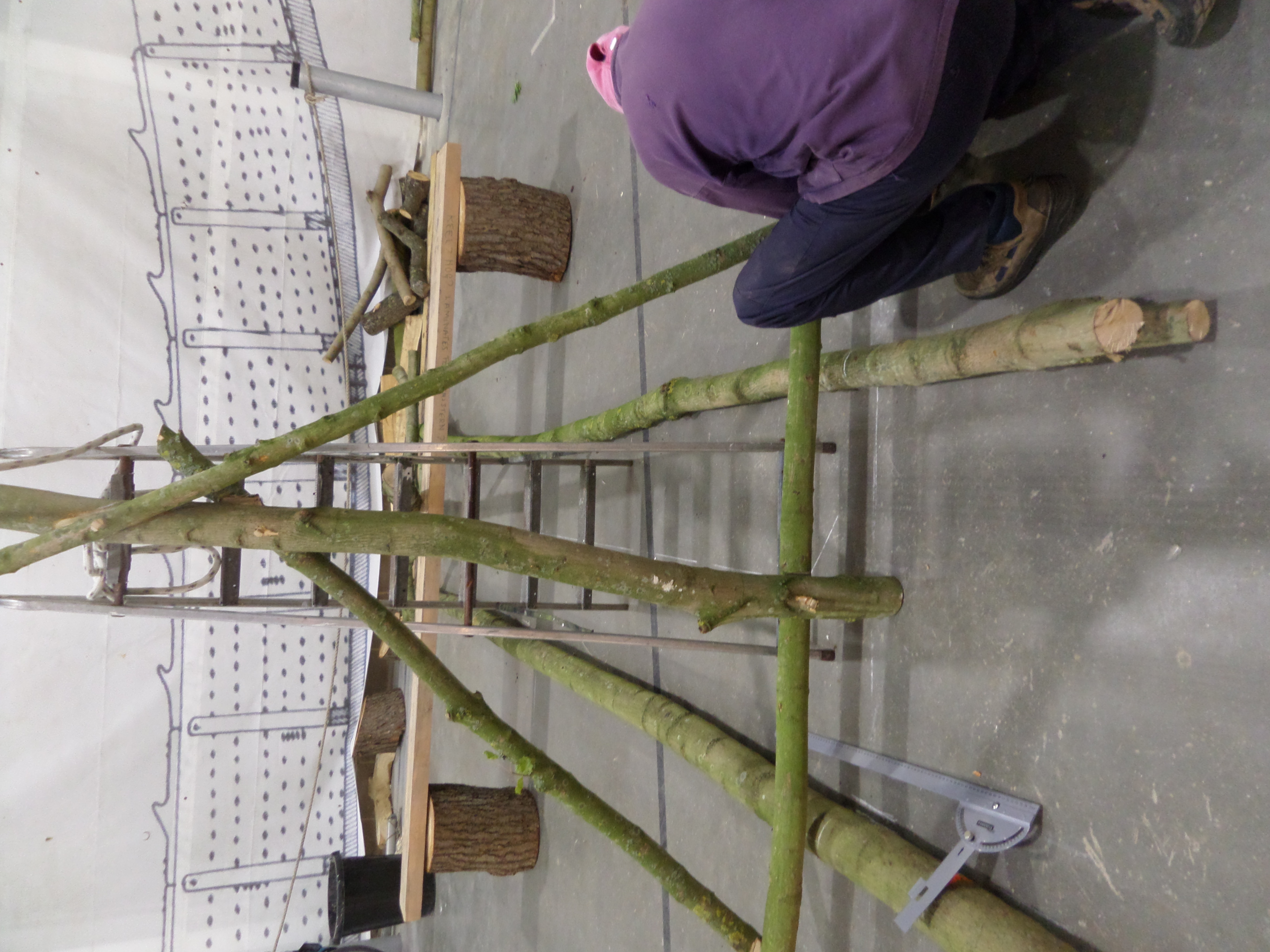 not collapse. They are used a great deal in buildings. The frame could also need some overhead support as shown in Shipshape 1 with shots from the film The Vikings. It is common to use overhead frame support for clinker boats as this leaves the ground below the hull clear for working access. If modern clinker boats are built inside sheds, the frames are often temporarily fixed to the roof beams.

All frames must be in perfect alignment with each other. This can be checked by standing at one end of the craft and sighting along the middle-line sticks on all the frames. The straight edge on each stick should perfectly line up with all the middle-edges on the other sticks. Another checking method is to have a tight overhead line running from the top of the stem, to the top of the stern. It could be difficult to get enough tension on a line 27metres long.

Below. The set up of frame 8 to illustrate its dimensions and how Anglo-Saxon/Roman methods could have looked. 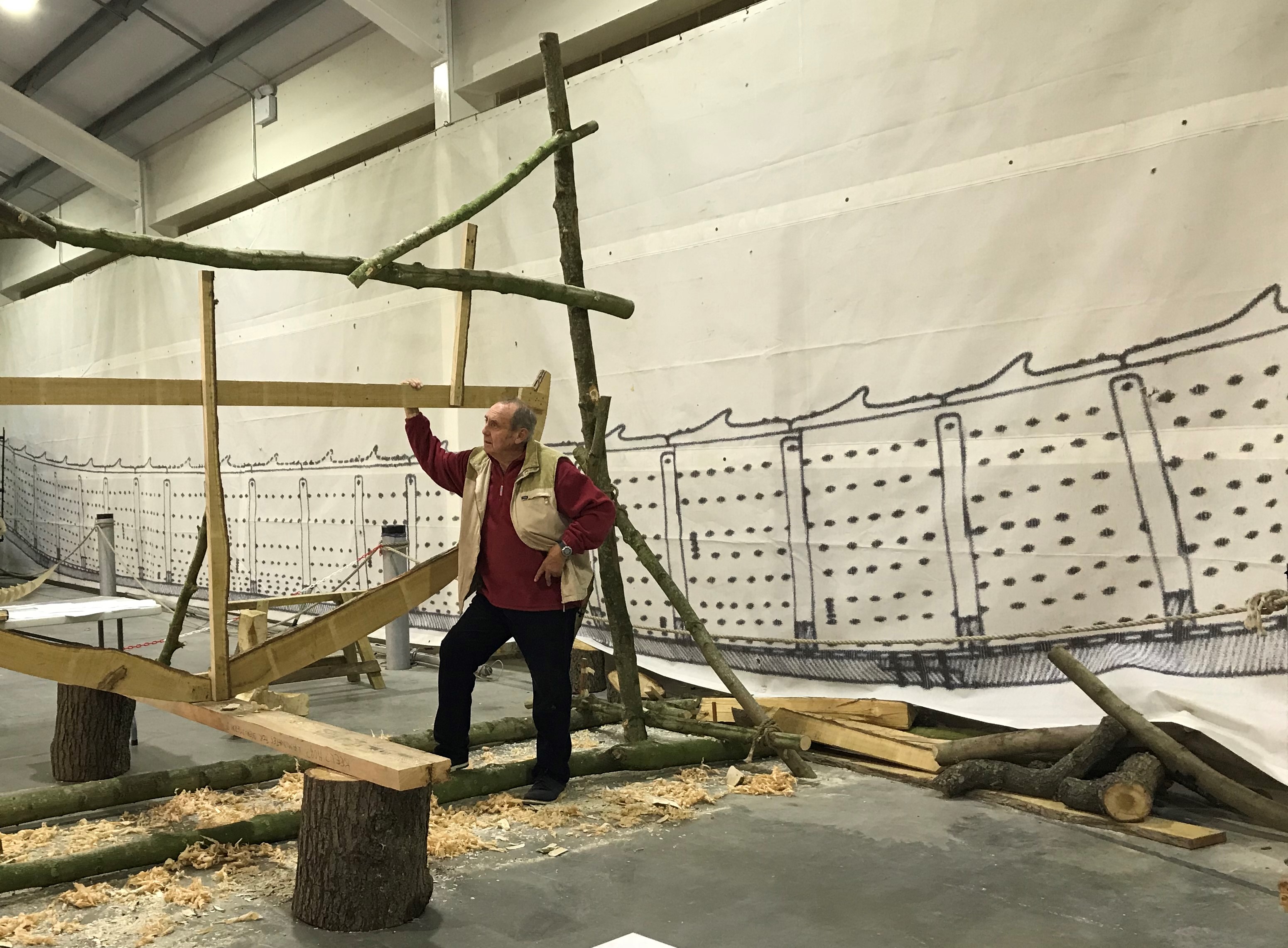 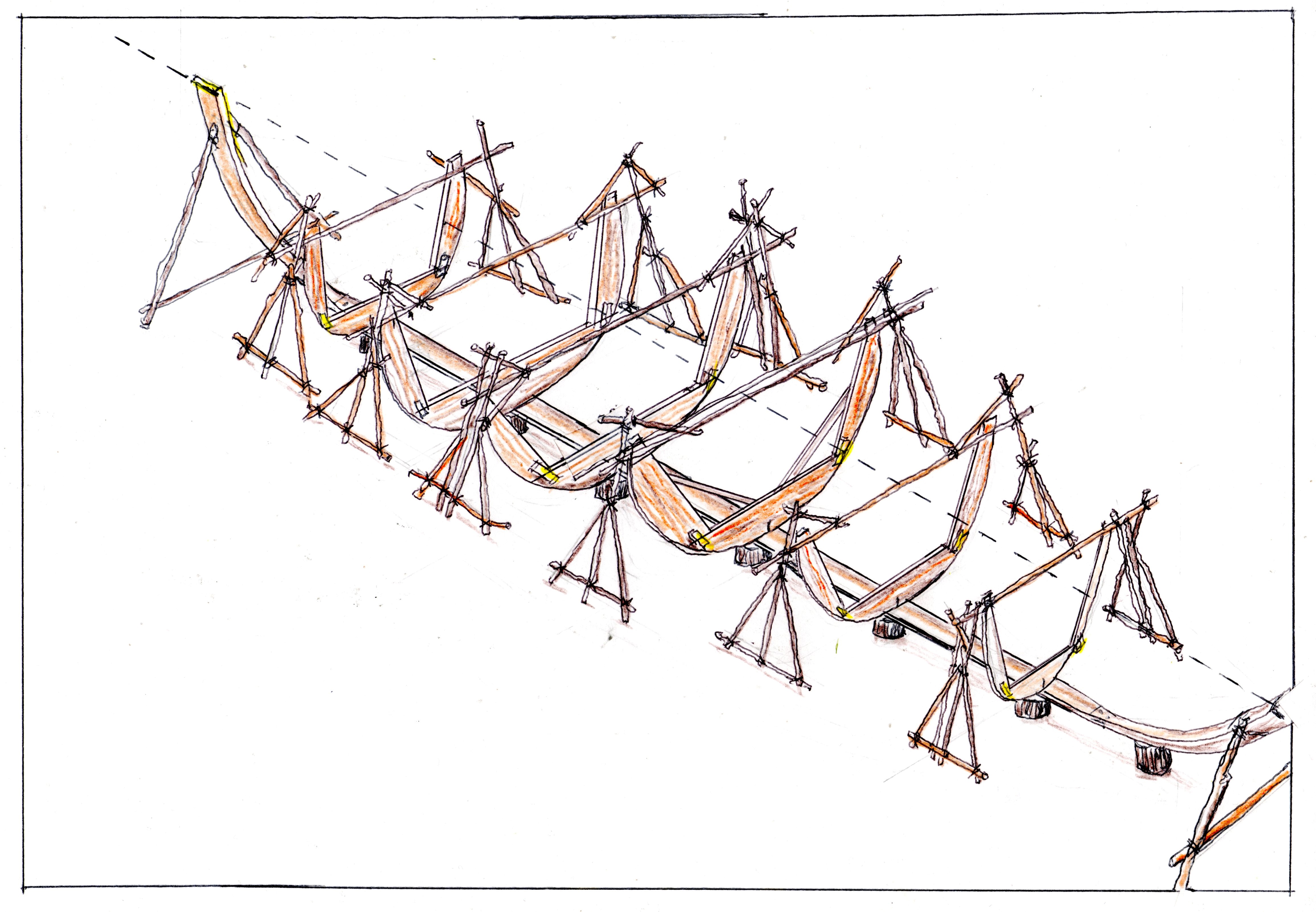 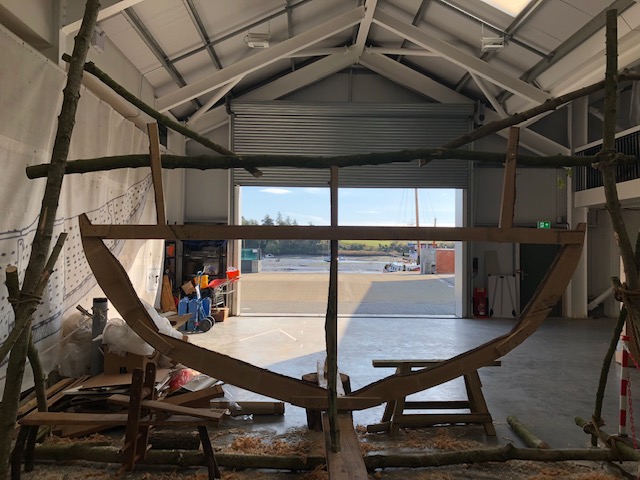